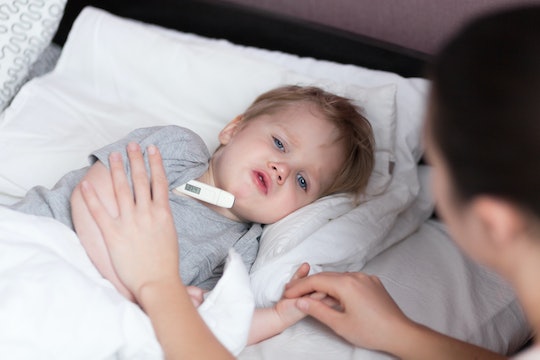 CDC: Flu Season Is Getting Worse As Child Deaths Rise To 53 — Here's What Parents Need To Know

Public health officials consider this year's flu season one of the worst in recent history — and with good reason. To date, more than a few dozen people have died and thousands have been hospitalized because of H3N2, the main flu subtype that's spreading across the country. And it seems the flu season will only get worse as 16 more children have died due to the outbreak, the U.S. Centers for Disease Control and Prevention reported on Friday. While this is indeed alarming to hear, here's what parents need to know to fight the spread of the virus and help keep kids safe.

The CDC released its weekly flu report on Friday, revealing that 16 influenza-related pediatric deaths were reported for the week of Jan. 21 - 27, according to CNN. That brings the total number of children who died from the flu up to 53 since October, when the flu season began. (The CDC received 17 reports of flu-related pediatric deaths during this time period, but one of those deaths occurred during the 2015-2016 seasons, but at the time, no subtyping was performed, according to the weekly flu report.)

The 2017-2018 flu season thus far is not the deadliest in modern history; 2014-2015 saw 148 influenza-related pediatric deaths, the most out of the last four seasons, according to CDC data. But public health officials warn that this year's flu epidemic is not over — not by a long shot.

We have not hit our peak yet, unfortunately. It is not going down yet. Really, the bottom line is there is still likely many more weeks to go.

The H3N2 strain is the same influenza strain that infected an estimated 34 million people and led to thousands of deaths during the 2014-2015 season, according to The Cut. The CDC considered that year to be a "moderately severe" flu season.

By all means, the 2014-2015 season was awful. But it seems this year's flu outbreak will have a deadlier impact. Just compare hospitalization rates: during week four of 2014-2015 season, 43 people per 100,000 landed in the hospital because of the flu. This year, 51 people per 100,000 ended up hospitalized, CNN reported. And cases continue to spike.

But why is the flu virus so dangerous this year? Norlund told The Cut it's because of how widespread the H3N2 has become across the country, explaining:

In previous seasons it tends to happen in different parts of the United States at different times. This is one of the first years we’ve really seen that widespread activity is everywhere. Flu is really across the board in every state at the same time.

That's why it's especially important for parents to follow all flu-fighting tips and practice proper hygiene. Young children are among the most vulnerable to the potentially deadly H3N2 strain because of their undeveloped immune systems, according to the CDC. They become more prone to serious or life-threatening flu complications, such as pneumonia.

Although this year's flu vaccine doesn't seem to be as effective as previous seasons, the CDC still urges families to get vaccinated, as studies show that annual immunization helps lower your odds of catching the flu. Even if it's not the best protection, it's better than none at all. In addition, parents should always wash their hands and help their children do the same, disinfect surfaces, cover your nose and mouth when you sneeze or cough, avoid close contact with people who are sick, and stay home when you're ill, among other flu prevention tactics.

Not sure what to look out for? Unlike the common cold, flu symptoms come on suddenly and are typically accompanied by a fever. Your child will feel weak; have a headache, dry cough, sore throat, and runny nose; feel pain and tiredness around your eyes; have severe aches in the joints and muscles; and have warm, flushed skin, and watery red eyes.

But some symptoms indicate the illness is severe. If your child has trouble breathing, sudden dizziness, confusion, severe vomiting, convulsions, coughing up blood, or has pain or pressure in the belly or chest, it's time to take them to the doctor.

The 2017-2018 flu season doesn't seem to be calming down anytime soon. For parents, that's pretty scary news. No one wants to their child or loved one to come down with a preventable illness, or worse, lose them to it. As everyone fights to stay healthy, let's remember to do our due diligence to keep our families safe and always check with your doctor if you have concerns about your child's — or your own — well-being, but especially during flu season.

More Like This
Viral Hives In Children: What Doctors Want You To Know
Does The FDA's Plan To Limit Lead In Baby Food Go Far Enough?
71 Instagram Captions About Love, Because It's All You Need
New Research Finds Parents’ Mental Health Improved During The Expanded Child Tax Credit
What Parents Are Talking About — Delivered Straight To Your Inbox