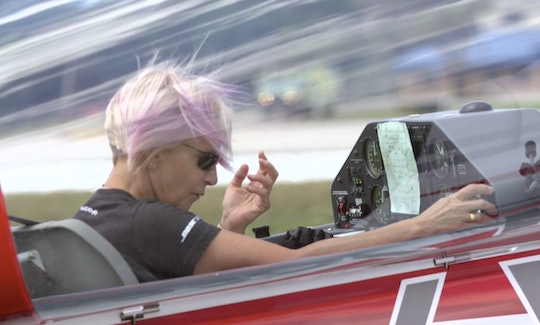 Why Every Kid Should See 'Fly Like A Girl'

As a child growing up, I had a slight obsession with Amelia Earhart — but then again, who didn't? For kids, there's little that's more exciting than flying, and Amelia Earhart has been held up as one of the sole female aviation heroes for for little girls for years. Now, however, one woman wants to change that: Producer and former teacher Katie McEntire Wiatt's Fly Like a Girl documentary aims to inspire girls to take to the friendly skies. The project is already in production, and it's shaping up to be an amazingly inspirational tour-de-force that will make young girls (and, ahem, full-grown women) want to jump in the pilot's seat.

According to Fly Like a Girl, women only make up 6 percent of pilots today — and according to the U.S. Department of Commerce, women hold less than a quarter of current STEM jobs in the United States, despite making up half of the general workforce. And it's no wonder, either: According to Business Insider, girls often grow up with stereotypes and internal biases that discourage them from pursuing STEM careers, and those that do make it often face lower pay, less access to resources, and receive fewer awards than their male counterparts.

Wiatt first came up with the idea for Fly Like a Girl during her time as an elementary school teacher, when she realized that many girls often struggled with confidence when it came to subjects like science, technology, engineering, and math. In a press statement, Wiatt explained:

I remember one student in particular, she was struggling with a math problem. She said, "Ms. Wiatt, girls just aren’t good at math." This student’s statement had a profound effect on me. Perhaps because it reminded me of a math teacher I had in 5th grade that told me "some girls, like you, just can’t do math." I couldn’t shake the feeling that this was a very common experience for many young girls.

Wiatt saw Fly Like a Girl as an excellent way to help young girls see women excel in STEM fields — and perhaps even visualize themselves as pilots one day. Because if girls grow up seeing women entering aviation and STEM fields and believe it's something normal and to be proud of, it might just be something they aim for, as well.

Fly Like a Girl is currently raising funds for production on Indiegogo and is looking to raise $150,000 in total. If you want to help young girls see themselves in the pilot's seat, head over and check out some of the rewards for funding or simply share the word about the upcoming documentary.