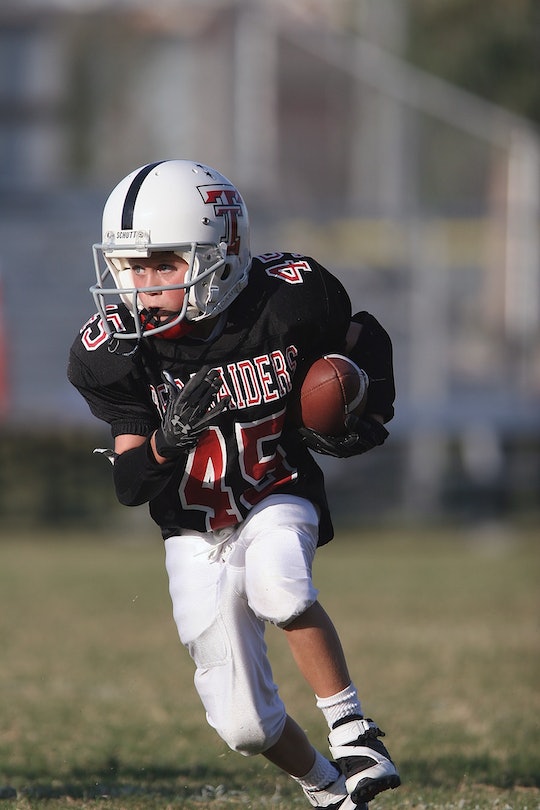 Football Can Cause Brain Damage In Kids Under 14, & Here’s The Crucial Info For Parents

For years, concussions have been feared in football — and for good reason. The collisions, tackles, and falls that cause concussions can result in brain damage that affects memory, concentration, and overall health. But a new study reveals that head injuries that are not considered concussions can still harm kids significantly. The study, published in the journal Radiology, finds that kids between ages 8 and 13 who play football show signs of traumatic brain injury, even without concussion symptoms, according to NBC News.

A team at the Wake Forest School of Medicine studied male players participating in a youth football program in North Carolina. The players underwent MRIs before the football season and after, and also wore special helmets during games that transmitted data on head impact to computers.

Brain scans at the end of the season showed changes similar to those that have been reported "in the setting of mild traumatic brain injury," researcher Christopher Whitlow said in a press statement. Boys who had more often experienced more head impact showed more changes in their post-season scans, according to the Atlantic. While the study didn't focus on long-term effects of head impact or what the changes in the brain scans would mean for the boys, researcher Joel Stitzel told the Atlantic that the changes observed in the players' brain structures "seem to be directly correlated with the impact that kids are sustaining."

The numbers here are pretty staggering. You have fewer than 2,000 people playing in the NFL, which gets all the media attention. But there's actually about 2,000 kids playing for every NFL player—3.5 million kids playing youth football in the U.S. About whom there is very, very little information.

The study didn't find outright that football in kids causes any lasting medical repercussions, but it did find that something happens in kids who experience head impact during football that looks an awful lot like traumatic brain injury.

Other researchers have recommended that younger kids not play football, as little is known about the effects of impact on their brains. What is known does not look favorably upon football as a kid's sport. In August, a Boston researcher told the Washington Post that she did not recommend tackle football to kids under 14. Because kids of this age have heads that are a larger part of their body and necks that are not as strong as adults', they "may be at a greater risk of head and brain injuries than adults."

The new study by Wake Forest researchers doesn't compare injuries in kids to those in adults, and its most important takeaway isn't that kids under 14 shouldn't play. But what it does highlight is that even kids who do not have concussions can experience changes in their brains as a result of head impact in football. The study has opened up a discussion about brain damage in younger kids and whether football is really safe. And as Whitlow told NBC News, it's raised a lot of questions about the long-term effects of the sport.

Do these changes persist over time or do they just simply go away? Do you get more changes with more seasons of play? And most importantly, do these changes result in any kind of long-term change in function like memory or attention or anything that would be important in your ability to function day to day?

More research is needed on the subject before any of those questions can be answered. In the meantime, parents and coaches should be focusing on encouraging safety in the sport while monitoring the health of their kids.