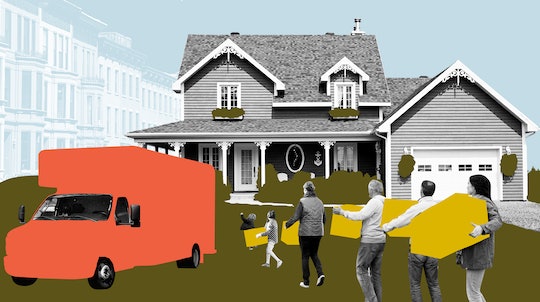 The Agony And Ecstasy Of Pandemic Suburbanites

Laura Gruppo was born and raised in Brooklyn, New York, and planned to raise her 3-year-old and 6-month-old as urban dwellers, too. “I’m very much a die-hard city person,” she says. Before the coronavirus hit, Gruppo, 30, and her husband were living in Arlington, Virginia, just next to Washington D.C., in a 1,100-square-foot apartment in a midrise building.

It was small but came with urban perks: parks and playgrounds and free museums. They could take the metro or walk anywhere. Great restaurants. Racial diversity. Life there, she says, was “quick and easy.”

And then came COVID-19. “Boom: pandemic,” she says. “Everything shut down.”

After a month trapped in the apartment with her husband and two young children, she decided her time as a die-hard city person was over. In August, she became what she never thought she would: a suburbanite.

There are three classes of urban dwellers, according to Alison Bernstein, president of The Suburban Jungle, a New York City-based real estate advisory she founded in 2010 to help city dwellers across the country move to the suburbs. There are the die-hards, who plan never to leave; the wait-and-sees, who hope that their careers, or the market, will change, allowing them to buy a city home someday; and the tourists, committed to a city stint but planning to decamp eventually. “They always had one foot out the door,” Bernstein says.

Here’s what’s unusual: “All three buckets are now leaving,” she says. “We’ve seen a significant shift.” The real estate company Redfin reported that 27% of house hunters searched for homes in different metro areas in the second quarter of 2020, a 25% year-over-year increase. The CEO of Zillow called it “the great reshuffling.”

Since COVID-19 arrived, the attractions that drew parents to urban life have dried up. Forced to live within the confines of the nuclear family and modest square footage, some parents’ priorities have changed. Many who self-identify as city people are sheepishly discovering the joys of backyards and parking spots. But amid a national reckoning on racism — and a Trump reelection campaign centered on stoking racist suburban fears — becoming a suburbanite is more fraught than ever.

I would not want to be in a place where it was all white families. I don’t want someone calling the police because they see my Black father walking down the street.

The most hyped defectors are the uber-wealthy, decamping from their already luxurious city homes to their second (or third or fourth) homes in the country or along the beach. Luxury resort towns like Aspen and Vail, Colorado, have seen an influx of urbanites. Certainly, it is a privilege to relocate, dependent on the ability to work remotely, for one thing. For people in low-wage jobs, says Claas Ehlers, CEO of Family Promise, a nonprofit that helps homeless families, “there isn’t a ‘better’ out there. Nobody is saying, ‘Hey, things are booming in rural Kentucky. Go there.’”

Kristin Lopez, a Redfin agent in Idaho, is seeing a huge wave of middle- to upper-class West Coast buyers looking for homes in and around Boise. “I’m working with everybody, from people looking for starter homes who can’t buy in California but can afford here, to wealthy people with tech jobs in the Bay Area.”

Since their jobs are going with them, commuting is less of an issue, which has changed their housing desires. “Pre-pandemic, people were saying, ‘I don’t want a lot of house. I don’t need a lot of land. I need to be close to the city,’” Bernstein says. “That’s completely shifted.” Now a lot of land, and a lot of rooms, are in demand as people plan to work and have their kids attend school at home. Many more markets open up.

After decamping from a two-bedroom apartment in Manhattan’s Stuyvesant Town to her parents’ vacant 3,000-square-foot country house in Putnam County, Rebekah Rosler, 40, started a Facebook group for New Yorkers grappling with whether to leave and where to go. Into the Unknown had 500 members within days. “Three months out, it had 8,000,” she says.

From New York, people are going upstate or to New England but also to other cities: Savannah, Austin, Boise. “People are just picking up and going wherever they want,” Bernstein says.

That includes the suburbs. Sarah Kuoni, 34, was living contentedly in Chicago’s Bucktown neighborhood with her husband, toddler daughter, and 60-pound dog. But even before the pandemic, she had doubts about their yardless two-bedroom being a permanent home. “My husband and I both realized we wanted a slower pace of life anyway,” she says. “We were OK with the suburban move [eventually], and then COVID just kind of pushed us out.”

I’m leaving behind the opportunity for my kids to be city kids. What does that mean?

They purchased a three-bedroom house with a huge yard in Glen Ellyn, a suburb of 27,000 people that is an hour train commute to the city and has good schools and good restaurants. “It didn’t feel like a strip-mall suburb,” she says. “It felt more like a small town.”

She adjusted much more quickly than she thought she would, finding that what she gained far outweighs what she gave up. “There are kids everywhere, and everyone plays outside,” she says. “It’s the ideal, picture-perfect suburban neighborhood.”

When Gruppo, the former Brooklynite, decided space mattered more than walkability, she looked for a suburb with racial diversity, which can be really hard to find.

“We’re a multi-racial family,” she says. “I would not want to be in a place where it was all white families. I don’t want someone calling the police because they see my Black father walking down the street.”

Her family settled in a Virginia suburb called Ashburn, which has community features like a tennis court and a pool, in a six-bedroom, four-bath home. “It literally has a white picket fence,” she says. There are people from all over the world, of many races. She has found one feature particularly miraculous. “My 3-year-old can just go outside into the yard,” Gruppo says.

Many parents in Rosler’s Facebook group ask what they’ll lose by giving up the diversity of the city. “If I pick up and leave, I’m leaving behind the opportunity for my kids to be city kids. What does that mean? Does it matter?”

Moving to Missoula is not an anti-racist act. It is a progressive act. We’re registered to vote here, and our vote’s going to matter.

Charlotte Kaiser, 47; her husband; and her son were deciding whether to come back to New York City this month or stick out the school year in their summer home in Montana, a modest ranch house in Missoula that they used to rent out during winter. Kaiser already worked remotely, and her husband, who founded a watch startup, isn’t tied to an office. Given the proximity to nature, the low cost of living, the excellent, affordable private school nearby, and what Kaiser called a “hippie sensibility” that fits her son’s personality, staying made sense.

Still, the decision to go wasn’t easy. “There’s so much more texture and density and diversity in New York and that felt really scary to leave,” Kaiser says. In the city, her son, who is white, went to a diverse school, and most of his friends were kids of color. They moved to a town that’s 91.2% white in a state that disproportionately arrests Black people. They fear being part of a wave of white flight that will leave cities with a lower tax base and more segregation, worsening already strapped schools.

“Moving to Missoula is not an anti-racist act,” Kaiser says. But: “It is a progressive act. We’re registered to vote here, and our vote’s going to matter.”

Other city-leavers see the upheaval of 2020 as a reason to focus exclusively on their own families’ needs. One woman I interviewed, who spoke on condition of anonymity, was leaving Chicago’s Ukrainian Village because of riots around her house; she feared for the safety of her 12-year-old daughter. “They let my beloved Marshall Fields be looted,” she said. “My whole neighborhood was boarded up.” Homeless people were sleeping in her parking spot. There had been a rash of armed car-jackings. That wasn’t the gentrified neighborhood she moved to, and she had no interest in helping sustain it through hard times.

“There’s a better life than this,” she said. For her, it’s in the suburbs, where she’s moving this month.

Relocating is of course contingent on finding a house, which is no longer as easy as it may sound. The volume of families leaving cities has created a merciless seller’s market, making it even harder for lower- and middle-class people to flee and causing bidding wars in markets that were modest just months ago.

According to the real estate company Redfin, 45% of homebuyers have bid on a home without first seeing it in person. More than half of offers Redfin recorded in June faced bidding wars. The National Association of Realtors reported a 21% increase in home sales in June, and experts expect those trends to continue, especially given historically low interest rates.

I spent eight weeks searching for homes in and around Kingston, New York, and a few other towns upstate. Often, the house was sold before I could get there to see it on a Saturday or had more than 25 offers, all at least 30% over asking. Eventually I gave up, worried that I’d be buying something for far more than it was worth, then have maintenance costs on top of that.

City dwellers who pay exorbitant rents or high mortgages and envision a cheaper lifestyle outside the city may not consider the additional costs of freestanding house ownership versus a co-op or condo, Rosler says. In her own family, “We did the math, and it will probably end up costing us more to live outside the city,” Rosler says. “Things are cheaper and you’re doing less, but the house upkeep is just astronomical.”

Things are cheaper and you’re doing less, but the house upkeep is just astronomical.

Even for those with resources, there are adjustments. It’s not always safe to outsource home maintenance, and cleaning out gutters yourself takes time. There’s no super to call for minor repairs. Utility companies aren’t always as responsive to outages in areas with lower population density. Recently, Rosler couldn’t moderate posts on her bustling Facebook page for absconding New Yorkers because she didn’t have power or internet for days after Tropical Storm Isaias.

Are those lucky enough to find a house that makes remote work and school more bearable thinking long term? When I abandoned my own search, I found myself wondering what will happen if thousands of New Yorkers decide to unload the houses they just bought as soon as a vaccine is found and administered and head back to the city they may not have really wanted to leave.

Bernstein generally advises that people who can afford to relocate first identify the area where they want to settle, then wait for the right house to come on the market, rather than buying a house they adore in a place they’re iffy about. “I can’t tell you how many people make this mistake,” she says. “They end up saying, ‘I love the mudroom, but I hate the community.’