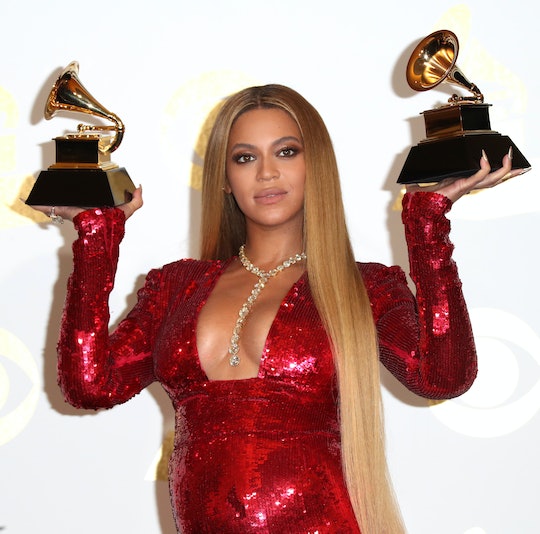 Arguing about how Beyoncé was wronged or about how unfair society is to black women or how forgiving it is of white women felt tired. It's a conversation we've had and had again, for years and years and years on repeat. That's when I realized I was missing the point. Ignore the fact that Beyoncé is one of the biggest celebrities on the planet, the most noteworthy name in the music industry. Ignore all her many gifts, because last year Beyoncé gifted me and many others like me one of the greatest gifts of all: She gave us series of music and visuals to help navigate us, to validate us, to lift us up in a world constantly trying to remind us that we are nothing, no matter what work or energy we put forward.

Beyoncé may have not met the criteria for white excellence last night, but when has that ever mattered?

In a world where we are constantly told that our blackness is not good enough, that we are "too black" or "not black enough," that we should be more "agreeable," more like this or like that — which is, more like white women — that we should shrink and make ourselves smaller, less "angry," less fierce, Beyoncé's greatest gift to us was to be unapologetically ourselves.

The first time I saw and heard Lemonade, I was actually in my car, getting gas. I didn't know what to expect, but I knew that either way, I was probably going to love whatever Beyoncé felt we were worthy to be given. When Lemonade first started I noticed I was holding my breath, and I'm pretty sure I held it throughout the whole video. I still find myself gasping a bit for air whenever I go back to watch it, because for me, Beyoncé's Lemonade summed up so much of my black experience with her lyrics, the poetry of Warsan Shire, and her visual art. I've lost count of how many times I've listened to Lemonade. I can't keep track of all the many times I've tried to turn every party into a Lemonade viewing party.

As a black woman, I know there is not one way to define blackness, and with Lemonade, Beyoncé did not attempt to define what it is or how it looks or how it feels. Instead, she simply gave the black community — especially black women — the gift of celebrating our blackness proudly and openly and without explanation. With Lemonade, she told us to celebrate whatever it is our blackness is or means or does for us. And in a world where we are constantly told that our blackness is not good enough, that we are "too black" or "not black enough," that we should be more "agreeable," more like this or like that — which is, more like white women — that we should shrink and make ourselves smaller, less "angry," less fierce, Beyoncé's greatest gift to us was to be unapologetically ourselves.

In the days following Lemonade's release I watched my Facebook and Twitter, even my texts and calls all circle around the fact that something had been made just for us. White consumption dictates that everything made must also be made with white people in mind, but with lyrics like "I like my negro nose with Jackson Five nostrils" and "I like my baby hair with baby hair and afros," Lemonade could not — would not — belong to the people who could not identify with that experience. The lyrics, the words, the very heart of Beyoncé's most revelatory, intimate album to date was not created for everyone. It was just ours, and it was meant to be only ours. It was for me, a black non-binary person. It was for my black daughter. It was for my black mother. It was for my black best friend. It was for a group of people so often pushed to the sidelines of their everyday lives that they often must ask out loud, Am I still here? Do I still exist? As long as I live, I'll never forget the day black women, femmes, and girls felt like something was given just to us.

Lemonade spoke so loudly to me and to many black women and black femmes around me. I'm aware not every black person felt the same life-changing magic as I did watching the visual album or listening to the lyrics, and I'd never want to pretend I know anyone else's experience with Beyoncé's music, but even if someone didn't believe it was made with the black experience in mind, we can all agree on who Lemonade wasn't made for. And on a night like the Grammys, it was easy to understand just how simply Bey's most masterful work to date was overlooked.

How could an audience not made to understand the struggle of being a black woman in 2016 give it the honor it deserves? I'm not saying what happened last night was right by any means, but it definitely wasn't surprising.

Lemonade validated us where we were. As we were. In a time of so much struggle, so much pain, so many black killings, its message echoed: We as black women, black femmes, black folk, do not have to be any better than who we are right now — because we are already great. Already brilliant. Already magnificent. Already magic. Beyoncé's music spoke to our power, with or without a partner to love us, with or without a job treated as "successful," with or without money. Lemonade was the story of our ancestors, the tale of where we've come from. It spoke of the greatness already in us.

Watching Lemonade then and now, it's clear her work was never intended for white women. It was intended for those of us who are so often pushed aside, so regularly overlooked. Once I remembered this, remembered the way that Beyoncé's words made me feel as a black person, I no longer cared about whether or not she got a Grammy. Would it have been worth it to see her black excellence honored? Of course. But I know that for me, this album is already the Album of the Year. Perhaps of the decade. And it's been that way since the moment I watched it for the first time.