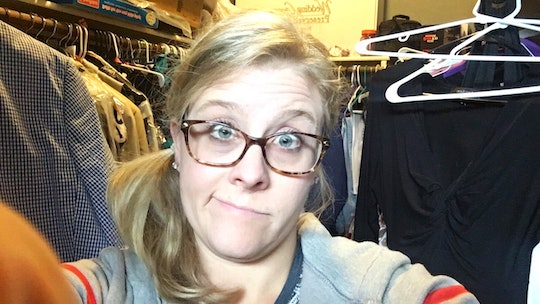 'Tidying Up' & Throwing Away Is For Privileged Moms

My drawers were purged, reorganized and refolded within an hour of watching the first episode of Tidying Up With Marie Kondo, despite my reputation as a pack rat. And as I dug through and pitched t-shirt after t-shirt into my donation pile, I knew in the back of my mind this wouldn't have been as easy 10 years ago. In defense of the other messy moms who find Marie Kondo's method difficult, it's much harder to identify what sparks joy when everything you own is hard-won.

Our family is currently living light years below the upper class, but we live what I consider to be a very comfortable life. Not to brag, but a few months ago I went to the grocery store and put organic blueberries in my cart without getting a knot in my stomach and putting the nice bread back. It hasn't always been that way. For the first several years of our marriage, my husband and I were barely scraping by. When we found out his $18,000 a year stipend was going to turn into $22,000 we splurged on a celebratory half order of Aussie fries and a burger at Outback. And when I say a burger, I mean one burger for us to share.

In those early years, grocery shopping consisted of taking a wad of cash I'd earned that day as a waitress, and grabbing whatever was "buy two get one free" at Winn Dixie. Still to this day I have to mentally remind myself it's possible to look at clothes and food that don't have a clearance sticker.

I'd never thought of my aversion to organization as a symptom of a bratty ungrateful heart.

I took extra grocery sacks so we wouldn't have to buy trash bags. I saved every lunch meat container and pickle jar to store leftovers. Date night was a $1 popcorn combo at Target and browsing the end caps for clearance items I could store in my closet for gifts.

We didn't have much, but everything we had we held onto tightly. Health insurance and discount pizza rolls were the biggest sparks of joy we had. I wore clothes I had since middle school because I'd rather be able to turn the heat up to 68 than buy a new pair of jeans. Honestly I still felt pretty rich because I knew so many people who were doing with even less than we had.

The trend toward a minimalist lifestyle is privileged. My house is a hodgepodge of things we've gradually collected as we could afford them, rather than a neatly curated design we coordinated and purchased at one time. Articles about minimalism on Pinterest will tell you to throw things away with holes, or get rid of chipped dishes. They encourage people to buy quality over quantity, which is great advice. But when you can't afford quality, and it was a stretch to afford those chipped dishes in the first place, it just isn't that easy.

It's the same reason a single mother of three will buy five fast-food items for a dollar each instead of one carton of organic strawberries. They need to do more with less, and clutter often becomes a part of that. It isn't that poor people hoard because they think more stuff is better. It's just that being able to buy and dispose of things at will isn't a reality for everyone.

I'm afraid to get rid of anything because I worked so hard to get those things.

After grad school, my husband and I both got jobs with substantially bigger salaries. But frugal habits die hard, and grocery trips were again dictated by sales with the occasional splurge. And even as we started feasting more, for the most part we still lived with a famine mindset.

Even now I have an upstairs closet with grocery sacks full of clothes that are too small for my oldest daughter but probably OK for my youngest next season. I have boxes of books and old pictures stuffed into what could be a really adorable little office nook, and I've got a dozen Sterilite totes full of fabric scraps, hot glue sticks and yarn balls from the one time I tried to learn to crochet. I'm afraid to get rid of anything because I worked so hard to get those things, and not so long ago I wouldn't have the luxury of buying it new if I ended up needing it.

If I'm being honest, organization has never really been a part of me. My house has always been the cluttered disaster that makes other women feel good about their own homes. But I don't think it's is anything to hide, so I've always been upfront about my frugal ways and my sloppiness with new pals. Some of my deepest friendships were born out of a mutual mess.

During the second episode of Tidying Up I started to see the act of tidying as an expression of gratitude for the things that you have. I'd never thought of my aversion to organization as a symptom of a bratty ungrateful heart. But when money was tight I couldn't afford to donate things that didn't spark joy. I'd have to dedicate weeks of my life to listing and selling everything in Facebook garage sale groups and meeting up with creepers in the Target parking lot because every single penny counted. I perked up when I learned about Marie's rituals of gratitude.

She first thanks the home, then she has her clients physically touch each item as they sort through the mountains of stuff. If the item does not immediately spark joy, they give thanks to the item and ask it to go and bless someone else. It seems ridiculous to thank a ratty pair of leggings, but it was the small act of gratitude that allowed me to fill a wall full of trash bags with things for the donation station.

I know that if I really need another pair of leggings I can go get them now. But giving thanks was also a way of allowing my frugal self to acknowledge that the item still had worth. It just didn't have a place with me anymore. And it's not lost on me that I am privileged to be able to just let go.