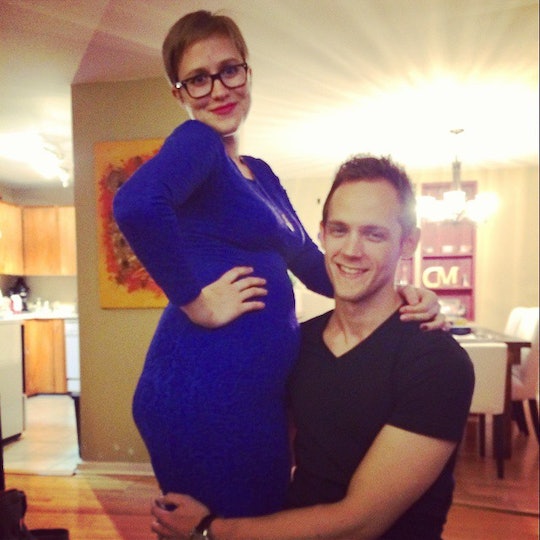 For The Love Of God, Please Stop Asking Me If My Pregnancy Was Planned

For most of my marriage, I did not want to have children. I was pretty vocal about this fact — mostly because the second I got married, people started asking me when we were going to have kids.

When I did finally get pregnant, I assumed that some of my friends and family were surprised to hear the news. But I don't think they were as surprised as I was when people asked me if my pregnancy was planned.

It was a question that left me feeling awkward, a little hurt, and, to be honest, pissed off. Because whether my baby was planned or not is absolutely no one's business.

Whether my baby was planned or not is absolutely no one's business.

The first time someone asked if my pregnancy was planned was after I posted my first ultrasound photo on my Facebook page. Because I hadn't told many people I was pregnant at that point, the photo inevitably sparked the "was it planned?" questions. I remember stuttering out the answer, "Um...well...yes?"

I felt embarrassed and angry: embarrassed that the question had been asked at all, and angry that I had felt the need to dignify it with an answer.

The problem with asking a pregnant women if her pregnancy was planned is that it is none of your business, just like it was no one's business when they asked me when I was going to have kids once I got married. At best, it's totally inappropriate to ask a person about her family planning method. At worst, asking a mom if her pregnancy was planned shames the mother — especially if it wasn't. Because when people ask if a pregnancy was planned, what they're really asking — whether they intend to or not — is: "I want to know if you have already carved out space for this baby in your life and if you haven't, I'm probably going to judge you for that."

The problem with asking a pregnant women if her pregnancy was planned is that it is none of your business, just like it was no one's business when they asked me when I was going to have kids once I got married.

Even though my pregnancy was, in fact, planned, the question remains: what if my baby had been an "oops" baby? What if the condom broke or I forgot to take my birth control on time? What if I thought I couldn't get pregnant because of some medical complication, so we didn't bother using birth control? What if I wasn't married and I got pregnant by my boyfriend, or a friend, or a casual acquaintance, or a random hook-up? Would any of that really affect how much I love my baby?

Because when you ask a question like that, that's what it really sounds like you are asking.

After about the third time I was asked whether my pregnancy was planned, I was at the end of my rope. At the time, I was working as a volunteer for a local, women-centred, non-profit organization.

When I told one of my fellow volunteers, who was also a good friend, that I was pregnant, she didn't ask me if it was planned. Instead, she asked me, without a hint of judgment or sarcasm: "How do you feel about that?"

Later on, I asked my friend why she had responded in tht way. She told me she knew that for some people, a pregnancy isn't always good news, and even when it was, people may still have conflicting feelings about it. She told me that she wanted me to know that it was safe to talk about my feelings with her and that she would try to understand.

In my opinion, this is the only acceptable way to ask the "was it planned?" question. This woman wanted to give me the opportunity to speak freely about my pregnancy. Her question didn't seek to shame me, nor was she casting any judgment on my choices. She asked it out of a place of genuine empathy and concern.

The next time someone announces their pregnancy and you feel the overwhelming urge to ask them if their pregnancy was planned, might I suggest, with the utmost respect and kindness, that you instead ask them literally anything else. Instead, say: "Thanks for telling me. How do you feel about it?" Because chances are, they're feeling a lot.