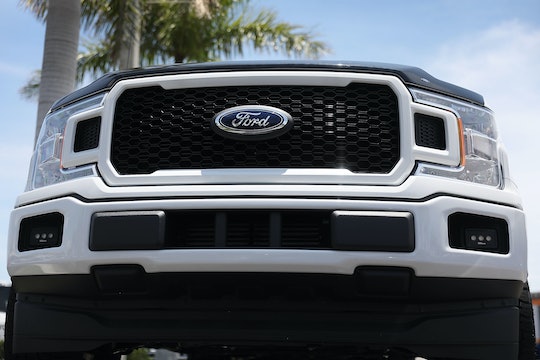 Ford Motor Company announced in June the recall of 441,000 cars sold in North America due to two safety concerns. One concern involved an "under-hood fire risk," while the other pertained to faulty side door latches. And on Wednesday Ford announced another major recall that is concerning to consumers. The company has recalled a whopping 550,000 cars and SUVs due to a gearshift problem, according to CBS News. Yikes. But before you freak out, rest assured there is plenty of information out there to keep you and your family safe. That being said, here's what you need to know about the latest Ford recall. Ford did not immediately respond to Romper’s request for comment.

Any type of recall is scary, but recalls involving cars are especially frightening. No parent wants to potentially jeopardize their child's life due to a faulty car part, to put it mildly, and no person should ever have to question the safety of their car. Mistakes do happen, however, and Ford is no exception to this reality. As for Ford's latest manufacturing issue, look no further than the gearshifts in some "2013-16 Ford Fusions and 2013-14 Ford Escapes," according to Forbes.

The problem is a bit complicated to explain, but essentially what's going on is as follows: Faulty shifter cable bushings could cause some Fusion and Escape models to unexpectedly roll away. It goes without saying that no good can come from a rolling car.

Ford said in a statement about the condition, according to Ford's website:

The condition could allow the driver to move the shift lever to ‘Park’ and remove the ignition key, while the transmission may not be in ‘Park,’ with no warning message or audible chime. If the parking brake is not applied, a degraded shifter cable bushing that detaches from the transmission could result in unintended vehicle movement, increasing the risk of injury or crash.

If you're concerned about your car, here's the list of affected vehicles, including where they were assembled, according to Ford:

Although there are no known accidents or injuries due to the malfunction, Ford wants to correct the issue ASAP. If your car is apart of the recall, your local Ford dealer will replace the shifter cable bushing at no cost. All affected consumers will be notified about the recall by July 30.

It's not exactly clear when the replacements will start, but the necessary parts are expected to arrive "late this quarter," according to CBS News. In the meantime, use your parking break to avoid any potential accidents.

As for Ford customers, they aren't impressed with the latest recall.

"I have had more recalls on my 2014 Ford Fusion in 4 years than with my 1995 Toyota Corolla," one person wrote on Twitter.

"Got a recall fixed on my car, as soon as i got it back, my bluetooth decided to stop working, and now there’s ANOTHER recall," someone else penned. "I’m so done with @Ford at this point."

At least one person, however, was able to find humor in the situation.

"So @Ford has a recall on the Ford Escape due to a malfunction that causes the car to roll away while parked," the commenter joked. "No one sees the irony here?"

Frustrations aside, it's important to focus on the steps you can take to keep you and your family safe. As with any recall, there's plenty information out there to keep you informed.