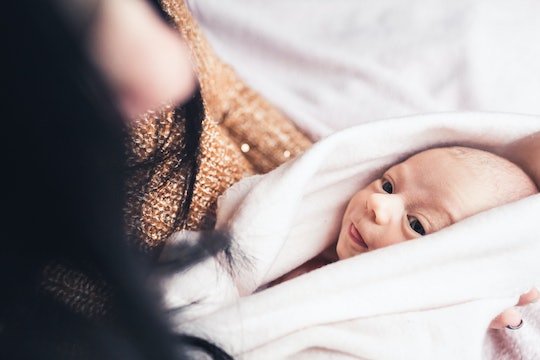 Mom, did you get the fancy diaper pail I wanted? Fotolia

People have never been nicer to me than when I was pregnant. At work my coworkers would go out of their way to make sure I had a chair to sit in at meetings, wouldn’t let me anywhere near cleaning products and never complained that I spent three-quarters of the day peeing. My mom threw me a beautiful baby shower at a restaurant, and family and friends showered me with love and all of the not-so-practical baby items I thought I absolutely needed.

I had a second baby shower at work complete with a cake made out of diapers and the cliché paper plate hat made out of discarded wrapping paper and bows. A month later my son was born. The few days we spent in the hospital were a blur, I felt so overwhelmed in my new role as a mother and the nurses were zero help. I remember pressing the call button one night around 2 a.m. because I hadn’t slept in 36 hours and my son would not let me take him off my chest. The nurse replied, “that's what happens when you’re breastfeeding” and walked out.

Once we got home my husband did his best to take care of me while I was trapped under a tiny tyrant who still refused to leave my chest. Two weeks later my husband returned to work, I was alone and I quickly realized that all the contraptions I had registered for and been gifted that I was supposed to plop my baby into while I did things like shower, pee, et cetera, were not going to fly in our house. I realized so many of the things people told me I needed or I thought I needed just were not a good fit for us and this is when I started to feel like we really should be having baby showers after the baby is born.

There were those who texted and asked what I needed and my reply was always that I was fine, I didn’t need anything. The truth was, I needed everything.

With the insane lack of maternity and paternity leave in the U.S., where we have shifted from being surrounded by large extended families to existing in an often isolated nuclear family, many new mothers find themselves alone with a new baby weeks or even days after giving birth. The truth is, nobody tells you all the gory details about what happens to your body the first few days after giving birth. Maybe they don’t want to scare you or maybe they blocked it from their memory but I was in no way prepared for having my entire body feel like I had been hit from a truck and barely being able to walk myself to the bathroom, where I usually wound up just peeing on the floor anyway because I had zero bladder control.

There were people who reached out and asked how I was doing, some people even asked if they could come visit but I told a lot of people that I wasn’t ready. My son was up all night and slept most of the day, so unless they wanted to visit me during the 4 a.m. party that was happening in our apartment every night, I was usually sleeping during the hours that normal humans were going about their day. There were those who texted and asked what I needed and my reply was always that I was fine, I didn’t need anything. The truth was, I needed everything.

I needed a nap, I needed someone to cook for me, I needed someone to tell me the broken blood vessels all over my face didn’t look as bad as I thought they did and that everything was going to be OK. I wanted to look like I had everything under control but if someone had just showed up at my door with a cake made of diapers I would have literally kissed their feet. I needed that same warmth and support that I received when I was pregnant, I needed a post-baby shower (literally and figuratively.) I needed a reason to put on a nice dress, actually leave my bedroom and have a bunch of people “ooh” and “ahh” over me while eating penne a la vodka in an air-conditioned restaurant.

My son is almost 2 now and I went through three different high chairs, two changing tables, two strollers, and about a dozen different diaper pails before I realized they all suck and a garbage can does the job. He never drank from the bottles I registered for, did not take a pacifier until he was 10 months old, and I can count on one hand the number of times he actually let me put him in his swing or Rock 'n' Play.

I had all of these fantasies about the kind of life we would have and the kind of mom I would be and I am here to tell you that our life looks nothing like I imagined it would be.

Not only would a post-birth shower do wonders for a new moms' mental health, but it just makes more sense from a practical perspective. When you register for things, you are just guessing about the kinds of things that may work for your family based on what other people have told you. This is in some ways the first lesson you will learn in motherhood: what works for other people may not wind up working for you — and that’s OK.

It isn’t until you have settled into your new life and get a glimpse into the personality of your little one that you actually know what it is that you need. I really could have gotten through those first few weeks or maybe even months with just diapers, a few onesies, and a ring sling. I had all of these fantasies about the kind of life we would have and the kind of mom I would be and I am here to tell you that our life looks nothing like I imagined it would be. The cloth diapers I thought I would use were quickly swapped out for Pampers when I realized I just couldn’t figure out how to fold them properly and frankly was just too exhausted to learn. We spent so much money the first weeks of my son's life buying things to replace the things we thought we couldn’t live without and were too tired to return.

If I had a chance to do it all over again, knowing what I know now, I would ask to hold off on the gifts, the penne alla vodka and the showering of love until a month or two postpartum. Our country has made strides toward better parental leave in the short time since I have given birth but we are nowhere near where we need to be and new mamas need more support.

We may put on a brave face and act like we’ve got this, but no new mom is going to argue if you show up at her door with a tray of lasagna and an Amazon gift card. We need to shower new mothers with love and support during the postpartum period which can be some of the most difficult and vulnerable days of a woman’s life. Motherhood wound up being more beautiful, overwhelming and downright messy than I could have ever imagined when I was pregnant and I could really benefit from a shower right now. Literally.

More Like This
Why Does My Baby Cough While Breastfeeding? Experts Explain
23 Sweet Quotes To Dedicate To Your Rainbow Baby
Double Your Fun With These Instagram Captions For Twin Pics
30 Marvelous Baby Boy Names That Start With “M”