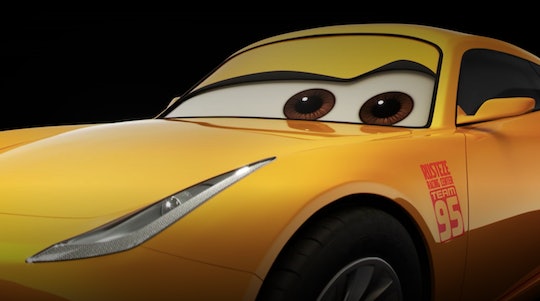 This 'Cars 3' Heroine Is The Feminist Of The Summer

Most of my favorite childhood movies have female protagonists. So a few years ago, when I found out that I would be the mom of a girl, I relished in the possibility of sharing all of my favorite films with her and exploring new ones together. When we went to see Cars 3 last week, I expected it to be, well, a kids movie. I left wondering why it hadn't been lauded as this summer’s kids’ version of Wonder Woman, because Cars 3 features one of this year's most compelling feminist heroines: Cruz Ramirez (voiced by Cristela Alonzo), a young, ambitious racing trainer and technician.

Cars 3 tells the story of Lightning McQueen (voiced by Owen Wilson in all three of the movies), who is loved and lauded and well past his prime. He's basically Michael Jordan coming back to the NBA to play with the Washington Wizards. As virtually all of his peers and trainers encourage him to stop racing and instead start marketing his legacy brand (an interesting concept to explore in a children’s film that will presumably also benefit from product marketing), he gets in a car crash and is assigned to a new trainer: Cruz Ramirez, one of the few female trainers in the male-dominated racing industry.

Cruz Ramirez’ training techniques seem silly to Lightning, who often berates the young trainer. Cruz has her own aspirations of being a racer, but she couldn't, because she was always told she wasn't good enough or fast enough, a criticism that will ring true to any moms who work in male-dominated fields. She's plagued with self-doubt, but by the end of the movie, after the two have reconciled, and Lightning ends up entering Cruz, now his protégé, into the race during the final lap, much to the frustration of his peers. Of course, Cruz wins, a triumphant victory against the loud male cars who told her she was not good enough to compete with them.

Ultimately, the message of Cars 3 is an eminently valuable one: you don’t need a man to teach you things that you can learn yourself, because self-esteem comes from within.

The film's overall takeaway is that with perseverance, confidence, encouragement, and a strong support system, girls and boys alike have the power to be resilient and successful. And in an age when young girls are still facing gender biases in the classroom, and female senators are being called out by their male colleagues for being too rude and hysterical, this message is necessary.

Not everyone thinks that Cars 3 has an empowering feminist message. Some critics who reviewed the film accused its feminist themes of being half-baked, noting that Cruz Ramirez only feels good about herself when empowered by a man (i.e. Lightning). “[Cars 3] doesn’t fully commit to the bold choice of female empowerment it clearly sets out to embody," one critic wrote.

It's true that the movie gently dances around gender roles: while the implication is clear, at no point do the characters explicitly say that Cruz Ramirez was discriminated against because she’s a woman. And it might have been more effective to have Cruz's final moment of triumph arrive as the result of her finding her own voice, rather than being told to race by Lightning McQueen.

But in an age when women are marching on Washington for equal rights and dominating the action movie box office, the decision to make the real protagonist of the film a bold, confident Latina female who succeeds despite the discouragement of her male peers is a conscious — and important — one. There is something to be said for a Disney movie trying to address the injustices that women have to face. It's not a solution to gender inequality by any means, but it's a starting point for talking about such topics with your children.

“Girl racers are just as good as the other racers," I told her. "Girls can do whatever they want."

Ultimately, the message of Cars 3 is an eminently valuable one: you don’t need a man to teach you things that you can learn yourself, because self-esteem comes from within. It's a noble attempt to make girls realize their worth, and as parents, it's our job to reinforce and further shape that notion.

I'm not sure if my 3-year-old came away from Cars 3 with the same idea: she seemed to mostly just be watching the movie. But as we left the theater, I found myself echoing the words of Lightning McQueen when he convinces Cruz Ramirez to live out her dream, except I replaced "you" with "girls."

“Girl racers are just as good as the other racers," I told her. "Girls can do whatever they want."