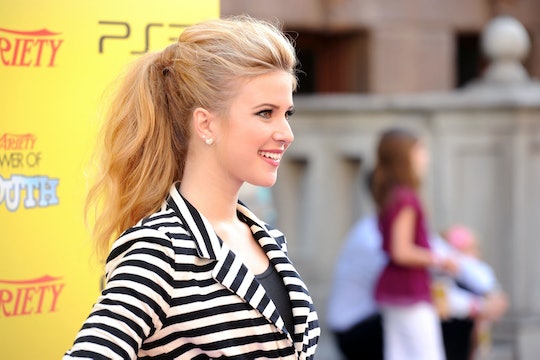 Considering all of the odd hiring choices the president has made over the past 14 months, you'd think that it was impossible for him to surprise anyone at this point. But it's probably fair to say that nobody expected a former Disney star to join Trump's press team. Trump's picks usually fall into one of three categories: family members, outlandish villains — think alt-right frog prince Steve Bannon or reality TV bully Omarosa Manigault — and people who are the very antithesis of their post, like a Communications Director that doesn't communicate, or a Secretary of Education that knows literally nothing about education. The newest hire appears to be none of the above, however.

Caroline Sunshine, an actress with a name that seems too good to be true, is best known for portraying "European exchange student" Tinka Hessenheffer on the Disney Channel original series Shake It Up. Sunshine's big break came in 2010, when she landed one of the few human roles in the film Marmaduke. According to her IMDb biography (submitted by her public relations team), she enrolled in Claremont McKenna College after wrapping Shake It Up in 2013 to study international relations and economics, while also working for the school's human rights program. Now, a decade after she made her debut in a Gogurt commercial, she's working at the White House.

In the years following her Disney show, Sunshine still acted off and on, most recently appearing in the 2017 Lifetime original movie Mommy, I Didn't Do It. She's been serving as a White House intern for the past three months, according to the Washington Post, until being hired as a press assistant earlier this week. Before that, she interned for House Majority Leader Kevin McCarthy, the College Republican National Committee, and the California Republican Party. White House spokeswoman Lindsay Walters told the Post that during college, Sunshine "was involved with the American Enterprise Institute," a conservative think tank based in Washington, D.C.

There were few clues that belied Sunshine's political leanings on social media. Her accounts are sparse, but she always remembered to post birthday wishes for her former costar, Zendaya, who moonlights as a progressive activist. She also regularly congratulates immigrants on becoming U.S. citizens, and she's super into the Fourth of July and the American flag. None of that seemed overly political in either direction, which is why news of her joining the Trump team came as such a shock to some fans.

Even when Sunshine did get political, it was hard to see which way she was leaning. On Election Day 2016, she posted an Instagram photo of an "I Voted" sticker, and captioned it with a quote from Dr. Seuss' The Lorax: "Unless someone like you cares a whole awful lot, nothing is going to get better. It's not." Earlier that year, she appeared in a YouTube video for Fusion as part of a series that asked young people to discuss the political issues that were most important to them. The network, which prides itself on "championing a young, diverse, and inclusive America," titled her entry, "Honestly, we should just let Caroline Sunshine run the country." Here's what she had to say:

Dear Next President, I hope you will carry out Alexander Hamilton's founding vision of a decisive, effective, and energetic executive. You have a lot of hats to wear as leader of our great nation, chief diplomat, commander-in-chief of our military, and guardian of our interests. I hope you will be our prudent leader, wise teacher, and inspiring coach. Lead by example. Teach us to be responsible with money. Help us to take care of our elders and others in need. Stand up to the bullies at home and abroad. Encourage us to be logical, independent thinkers. Help us to be brave, and flourish in challenging times. If you ever feel overwhelmed, I hope you will take comfort in those who have come before you, the support of the American people, and, in Lincoln's words, those who "have laid so costly a sacrifice upon the altar of Freedom."

Was she talking about Trump that whole time? Seems pretty unlikely, but then, we never really knew her, did we?