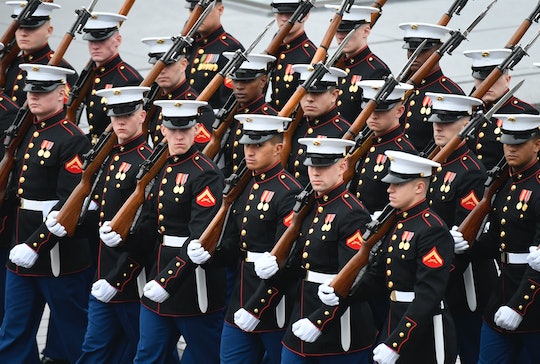 The U.S. Military is currently investigating reports of nude photos of female marines being shared amongst Marines in a closed Facebook group. Since the beginning of this year, photos — many with identifying information — of dozens of female members of the armed services have been shared. When pressed about the incident, a member of the group and former Marine blames nude photo sharing on "social validation," and the fact that women are allowed to be Marines in the first place.

Update: Chiles responded to Romper's request for comment by email and said he believes his comments were "taken out of context." He described the question The Daily Beast reporter asked to Romper and then explained what he meant:

[The Daily Beast reporter] asked me a question regarding why I believed this behavior happened. When I brought up social validation I mentioned it as the following - that when stuff like this happens, often times people will post negative material looking for some sort of validation. Like an achievement for doing so. So what happens is they (the person who posted) get all of these likes and comments, they get this sense of euphoria. So they start to believe that what they're doing is correct. Then others in the group catch on and start doing the same. In all actuality, the sharing of the photos was wrong and harmed the integrity of the Marine Corps. That's what I meant by social validation. I wasn't saying it was right. I was saying people get that sense it was right when it was wrong.

Marshall Chiles, a former Marine and spokesperson for the now defunct Facebook group MarinesUnited, attempted to justify the group's behavior to The Daily Beast:

I think the exploitation of sharing nudity of other service members online will eventually get solved, but what I’m saying is that even before then, you still have special cases going on inside units. So when you integrate women, those numbers are going to spike up within those infantry units and that’s just more things for the Marine Corps to worry about. And it’s not just the Corps, but the Army as well.

Romper reached out to Chiles for further comment, but has not heard back.

The insinuation being that the taking and sharing of explicit photos would be justified because it contributed to the bonding amongst the men in the group. This "boys will be boys" mentality is something that is often used as justification for sexual violence against women and is largely considered to be a totem of rape culture. This infantilization of men by the media, the justice system, and academic institutions has continued to enforce the justification of these behaviors, which put women at risk both in real life and online.

Many of the photos were apparently taken by male Marines while the female Marines were unaware, then the photos were uploaded to the group where they could be commented upon, according to CBS News. Meaning that not only were the female Marines having their privacy violated in the field, but on the internet as well. When the initial report from the Center for Investigative Reporting was released, Sergeant Major Ronald L. Green denounced the group's behavior in a statement to CBS:

There is no place for this type of demeaning or degrading behavior in our Corps. Let me be perfectly clear; no person should be treated this way. It is inconsistent with our Core Values, and it impedes our ability to perform our mission.

The sharing of the photos began within a month of female Marines joining the infantry on Jan 5, according to the Center for Investigative Reporting. While the original group was shut down, in a follow up piece The Daily Beast reported that several new groups had cropped up to replace the original, and were continuing to post photos. The investigation, being conducted by the U.S. Department of Defense is currently ongoing. The incident shines a light on not just issues of national security, but the pervasive sexual harassment and abuse that female members of the military face.