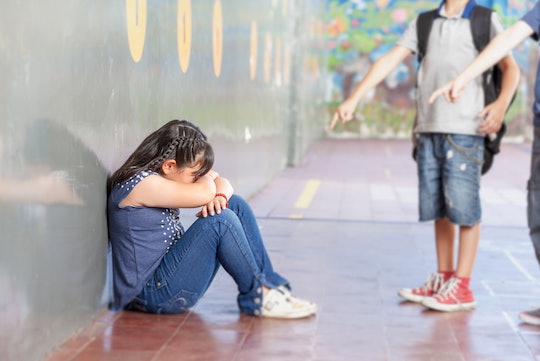 How Parents Can Help Their Kids Combat Bullying, According To New Research

The impact of bullying stays with a person long after the incident has occurred. Almost everybody has a story of being bullied at one point in their childhood, but what stands out most are those moments when someone else stepped in to help. A new study found that fostering strong relationships with your kids can help combat bullying in a pretty powerful way.

The first uniform federal definition for bullying was introduced by the Centers for Disease Control and Department of Education in 2014, according to Stop Bullying. Some of the core elements of bullying, according to Stop Bullying, include: unwanted aggressive behavior; observed or perceived power imbalance; and repetition of behaviors or high likelihood of repetition.

Bullying can make victims feel powerless and having other kids step in can make a world of difference. But, how do parents encourage their kids to stand up against bullying? According to a new study, fostering positive and supportive relationships with your kids is key.

Researchers from North Carolina State University and the University of South Carolina conducted a study with 450 sixth-graders and 446 ninth-graders, according to Science Daily. For the study, Science Daily outlined that all participants completed a survey to collect data on their relationships with family, peers, and teachers.

Additionally, according to Science Daily, participants were also given six scenarios dealing with a specific aggressive act: physical aggression; cyberbullying; social exclusion, or rejection by a group; intimate partner violence; social aggression; and exclusion by a former friend.

The researchers found that young people with good family relationships were more likely to intervene when they witnessed bullying or other aggressive behaviors and they were more likely to step in if they saw victims planning to retaliate, as noted in the study's findings. According to NC State News, kids who were already excluded or discriminated against by peers or teachers were less likely to stand up for victims of bullying.

Lead author of the paper on the study, Kelly Lynn Mulvey, said, according to NC State News:

There’s a lot of research on bullying, but very little on the extent to which family factors affect whether bystanders will intervene if they see bullying. This is important because research has shown that peer interventions are very effective at stopping bullying and preventing future aggressive behaviors.

Mulvey went on to explain, according to NC State News, that these interventions are rare, so one goal of the work was to identify how family and school factors can empower students to intervene when they see bullying.

Researchers also fond that sixth-graders were more likely than ninth-graders to find aggressive behaviors unacceptable and to intervene, according to MedicalXpress. This highlights why it's important to carry anti-bullying measurements into high schools.

In September 2018, a report by YouthTruth found that a third of students said they were bullied at school last year. According to USA Today, that's an increase from two years ago, when just over one in four students reported having been bullied. The study also found, as reported by USA Today, that most students said they were bullied due to their appearance, with sexual orientation and race as the next highest reasons. Additionally, USA Today reported that higher rates of bullying occurred at majority white schools, where students of color saw a steeper increase in bullying over the last year.

These statistics show that it's important to start taking bullying seriously. Schools and families need to begin responding appropriately, but it's also time to start empowering young people to help each other. When you're being bullied, someone stepping in to help you can make all the difference.