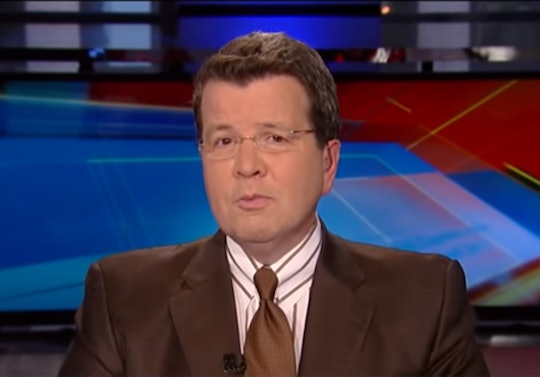 After criticising the President of the United States for praising the leader of a hostile foreign nation and throwing his own intelligence community under the bus, Fox News host Neil Cavuto was inundated with fat-shaming hate mail from pro-Trump trolls. But rather than letting the insults get to him, Cavuto read them on air on Thursday night, responding to viewers' hateful comments with cheerful quips. They say that the best way to defeat a bully is to ignore them, and it seems that Cavuto's really taken that lesson to heart.

Cavuto's a rare bird over at Fox News, the same network that hosts Fox & Friends and Sean Hannity, who often seem more interested in getting the president to tweet about the latest at-right propaganda they're parroting than actually reporting, ya know, news. So it's understandable if some viewers might be jarred awake when four o'clock rolls around and the soundtrack in the backgrounds of their homes changes from a choir of praise to a lone man shouting, "The emperor has no clothes!" But if you don't agree with what he's saying, folks, let's stick to that. Criticizing Cavuto's body for criticizing Trump's diplomacy skills is immature, lazy, and mean-spirited. Besides, do we really want to get into a Cavuto vs. Trump beauty contest, here?

The trouble began with Monday's Helsinki conference, when Trump called Russian President Vladimir Putin "strong and powerful," and announced that despite the entire U.S. Intelligence community's unwavering insistence that Russia meddled in the 2016 presidential election, he was choosing to trust the word of an ex-KGB agent who just "won" his own fourth term after having his rival arrested. I'd be curious to learn what Trump's supporters thought about Obama meeting Castro, wouldn't you?

After Cavuto's guest opined that the press conference would have been the perfect opportunity to "look Putin squarely in the eye and say, 'You will be punished for what you did in 2016, and don't ever think about doing that again,'" Cavuto concurred:

But he didn't. And that's what made it disgusting. That's what made his performance disgusting ... A U.S. president on foreign soil talking to our biggest enemy — or adversary, or competitor; I don't know how we define them these days — is essentially letting the guy get away with this.

But the backlash made little to no mention of Putin, or hacking, or international relations; instead, critics focused only on how to best hurt Cavuto's feelings. They called him "fat *ss," "tubby," "fatso," and a "chubby chump" with a "fat neck" who should "eat a salad." They compared him to Fat Bastard from Austin Powers ("But he was funny; you're just gross"). They wrote that he's a "mess to look at," and he should "pack up your ring-dings and leave."

And then there are the thinly-veiled death threats:

I used to give you a break because of your health issues... Cancer, M.S., that heart thing, or whatever else God is punishing you with at the moment. But not now. Now I just want you gone. And if that means dead, so be it.

One long, hateful tirade ended with the caveat that the writer was going easy on Cavuto because "I don't want to be the one responsible for a drug overdose. But that doesn't mean I can't hope, right?"

Ah, to be the voice of reason at Fox News. Cavuto must be the loneliest man on TV.