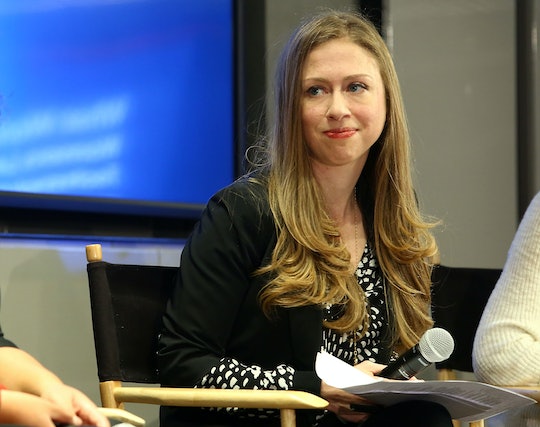 It seems not a day goes by without a mention of “the Clintons,” mainly Hillary, though Bubba still has the ability to make his fair share of headlines. But on Monday, Chelsea Clinton captured our attention when she announced her second pregnancy and the former Secretary of State just received the best Christmas present ever: a second grandchild! But hold on. Maybe we shouldn’t celebrate just yet. Eric Bolling of Fox News has a theory for us all: Chelsea Clinton “timed out” her pregnancy to boost her mother Hillary Clinton's presidential campaign.

Boiling did not suggest Chelsea’s pregnancy is fake, though he did suggest that Chelsea “timed [it] out” to coincide with the 2016 elections. (Because, yeah, that’s better.) During a Monday broadcast of The O’Reilly Factor, host Dana Perino noted that the Clinton campaign is casting her as a “tough grandma” type, and implied that the news Chelsea Clinton is pregnant again only helps to push that narrative. Boiling responded:

Is that timed out? Did they do the math?

While Perino said she “would never suggest such a thing," her co-host went on:

The DNC timed those democratic debates for the 'SNL' weekends and 'Star Wars,' who knows ... [t]hey’re good at timing on the left.

This isn’t the first time Chelsea’s intentions to have children have been brought into question. When she and husband Marc Mezvinsky announced their first pregnancy, Newsmax pundit Steve Malzberg suggested Clinton’s grandchild would serve as a “prop” for her 2016 run.

But I have a better suggestion: I doubt Chelsea’s decision had anything to do with her mother’s presidential aspirations. Did anyone think maybe she just wanted to have a second kid, or it was (gasp) unplanned?

What's more, who's to say Chelsea Clinton hasn't being trying to conceive for quite some time now? According to WebMd, "about 85 percent of all couples will get pregnant within a year, but it's also wise to have some realistic expectations. The average time it takes to conceive, for instance, is about six months, and women under 35 should wait until they've tried for a year before they consider calling their doctor or a fertility specialist with concerns."

So, yeah, how she conceived, when she conceived, or why she conceived is none of our damn business. It is insulting to her and to all women who struggle to conceive on a daily basis to insinuate (however slightly) that her pregnancy might be part of a larger-scale political plan.