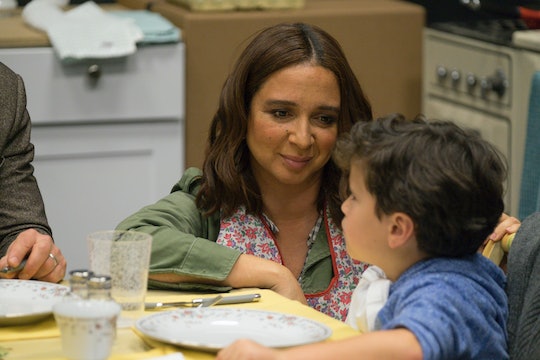 An all-new live TV production is coming to FOX just in time for the holidays. This Sunday, Dec. 17, you can see A Christmas Story Live! and relieve the classic '80s film with an all-new cast of characters. Even if you've already seen A Christmas Story a hundred times or if you've never seen it before, this new live production will surely be a fun interpretation of the original film. Why? FOX's A Christmas Story Live! cast is filled with a lot of familiar faces and hilarious stars. But if that's not enough to convince you to tune in, you won't believe who signed on to bring the show to live TV.

Back in 2013, Tony and Oscar Award winners Benj Pasek and Justin Paul, whose work you may recognize from Dear Evan Hansen and La La Land, penned a musical adaptation of A Christmas Story, which ran for a short time on Broadway. Now that creation is coming to our TV screens, along with a few new songs specifically added for the live production. So while the movie will always hold a special place in your heart, it'll be exciting to see FOX's interpretation of this holiday classic. Make sure to watch it tonight at 7 p.m. EST and check out the full cast (and who they'll be playing) below.

The Emmy-nominated actress and Saturday Night Live alum will play Ralphie's mother in the live production. No doubt her comedic talent will be put to good use in this funny musical.

The two-time Tony winner will lead the show as the Narrator and the adult version of Ralphie. He'll be the one to tell us this Christmas story. Perhaps you'll see his wife, Sarah Jessica Parker, in the live studio audience. You never know!

Although this is the 11-year-old actor's first big role, it isn't the first time he's been on TV. Walken has actual had small roles on the shows NCIS and Heartbeat in the past.

The Good Girls Revolt alum will play Ralphie's dad, or Old Man Parker, as he's also called. You may also recognize Diamantopoulos from his roles on About a Boy, Episodes, and Arrested Development.

Another newcomer to the production is 7-year-old Wladis who plays Ralphie's little brother, Randy.

Another SNL alum, Gasteyer, who also appeared in Grease Live! as Principal McGee, will play the hysterical mother of Ralphie's friend, Schwartz.

The Tony-winning actress will play Ralphie's teacher and she too will have to listen as Ralphie attempts to convince her that he should get a Red Rider BB Gun for Christmas.

The Dr. Ken alum has been tapped to appear in A Christmas Story Live! as a Christmas tree salesman and a restaurant owner.

Grier, who appeared in NBC's live production of The Wizard of Oz as the Cowardly Lion, will now don a Santa suit as Ralphie tries to tell him what he wants for Christmas.

It's unclear what exactly Bebe Rexha's role is in A Christmas Story Live! but she will open the show by performing one of the new songs made for the production, "Counting on Christmas."

The new boy band will perform in the show as carolers, though it's unclear if they'll sing typical Christmas carols or one of the new songs made for the show. You'll just have to tune in and find out.