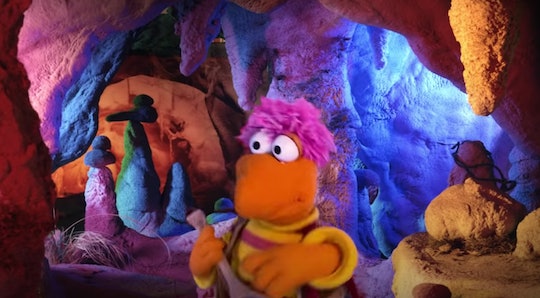 Jim Henson's beloved crew from the 1980s Fraggle Rock is coming to Apple TV+ with a fun new series. And, best of all, you don't even need a subscription to access the brand new episodes starring the muppets we all know and love.

Just log into the Apple TV+ app to watch new mini episodes of the new series, Fraggle Rock: Rock On. Characters like Gobo, Red, Boober, Mokey, Wembly, and Uncle Traveling Matt return in the new series, mixing their classic songs and personalities with brand new, modern storylines. In Fraggle Rock: Rock On, the Fraggles are living in separate cages and find ways to have fun together, which sounds a lot like the social distancing measures that families across the country are practicing from home right now.

All you need to do to watch the five-minute episodes, which will be released on Tuesdays, is download the Apple TV+ app on your device and go from there to watch Fraggle Rock: Rock On for free. But if you do choose to subscribe, an Apple TV+ subscription costs $4.99 a month following a free seven day trial.

Fraggle Rock debuted on HBO in 1983, according to Deadline, introducing the world to the colorful creatures named Fraggles, their neighbors the Doozers, their underground world, and loads of eclectic music. The original series isn't currently on Apple TV+ — just the new mini series, which was filmed exclusively on iPhone 11s — but some of the original episodes are available to purchase on YouTube.

This isn't the only family-friendly show on Apple TV+; with a subscription, you can watch shows like The Helpsters, a show about monsters who love to help solve problems, and Snoopy In Space, which focuses on Snoopy's dream to become an astronaut.

Whether you're a first-time watcher or had a Fraggle Rock lunch box, it's easy to appreciate the colorful characters and their catchy songs. You can stream the first five-minute episode of Fraggle Rock: Rock On right now and look for new ones every Tuesday.