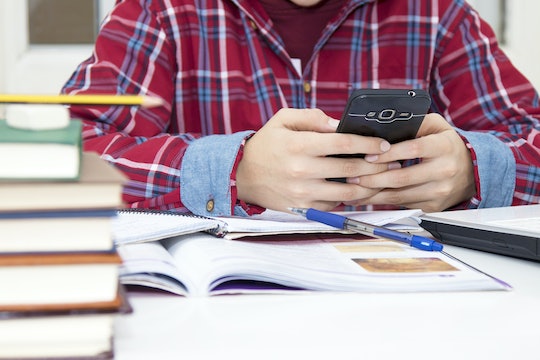 France Bans Smartphones At School, But Should America Follow Suit?

Starting this September, French schoolchildren will be forced to actually run around and play at recess, according to Marketwatch. While students were originally prohibited from using mobile devices only during class, France has now banned smartphones in schools at any time for kids ages 3 to 15, while schools with older students may choose whether or not to adopt the ban. "Our main role is to protect children and adolescents," said French Education Minister Jean-Michel Blanque, citing previous studies on kids' addiction to technology.

Marketwatch detailed one such study (albeit a small one) in which researchers followed 118 cognitive psychology students for one term to see if access to phones, laptops, and tablets would affect their performance on exams. While the scores for quizzes given at the end of class were comparable between students who had such devices and those who didn't, the long term results showed a big difference: students who had access to mobile devices scored 5 percent lower, or half a letter grade, on their final exams at the end of the semester. Even students who didn't actually use their devices were affected, as classmates' use during class proved distracting. This should probably come as no surprise to anyone who's worked in an open-space office with that one woman who carries on loud personal conversations all day long (I'm looking at you, Kathy).

Banning Candy Crush during class seems like a no-brainer, to be honest, but should we really not allow kids to have phones at all? The Lafayette, Louisiana school district doesn't think so. According to KLFY, mobile devices were originally banned, and enforcing the rule ended up causing more problems than it prevented. "Two years ago, every week I'd get cell phone confiscation issues," said Chief Administrative Officer Joe Craig. Now, students are allowed to carry their phone in their backpacks during the school day, and use them after getting permission from a teacher. Generally, though, phone use is only permitted for emergencies. "If you would happen to have an active shooter situation, kids are allowed to use their phones," Craig said.

But smartphones might be causing other problems for kids, besides simply being a distraction. A Swiss study recently published in the journal Environmental Health Perspectives suggests that frequent use of mobile devices may affect memory in teenagers, due to the radio frequency electromagnetic radiation, or RF-EMF, they emit. Researchers followed 700 kids between the ages of 12 and 17 for one year, and tested their ability to remember and understand abstract forms, images, shapes, and patterns. They found that those who had increased RF-EMF exposure scored lower. Interestingly, teens who held their phone next to their right ear were more susceptible to the effects of RF-EMF, likely because the part of the brain associated with the memory tasks they were tested on is in the right hemisphere. Kids and teens are more sensitive to such radiation than adults, because their skulls are thinner than adults', and their nervous systems are more delicate. The good news is that using phones for texting, playing games, and watching videos did not increase RF-EMF exposure or affect memory, so if your kid is among the five in the world who actually talks on a phone, maybe get them a headset.

Still, that was only one study, and a narrowly-focused one, at that. Technology has advanced so rapidly that we still haven't caught up with what other effects increased exposure to screens might have on kids. That's why last week, a bipartisan group of senators and representatives led by Massachusetts Sen. Ed Markey introduced the Children and Media Research Advancement Act, which calls for the National Institutes of Health to study the health and developmental effects of technology on infants, children, and adolescents, including its cognitive, physical, and social-emotional aspects.

Kids age 8 and younger now spend 48 minutes a day on mobile devices, Markey's press release noted, more than triple the amount of time they did in 2013. And 42 percent of kids that age now have their own tablets, six times more than those who did five years ago. Is that bad? We don't know, but Markey wants to find out:

While technology educates and entertains our children every day, we need a better understanding of how it impacts their social, psychological, and physical well-being. This bill will enable experts to conduct critical research that will inform parents and policymakers about how best to protect American children’s bodies and minds from issues such as tech addiction, bullying, and depression in the digital age.

While we're all well aware that screen time should be limited for kids, but what about educational apps and games, or tablets and computers at school? Does that still count? To figure out what's best for your child, the American Academy of Pediatrics has a calculator to help parents devise their own "Personalized Family Media Use Plan." And don't forget that headset.