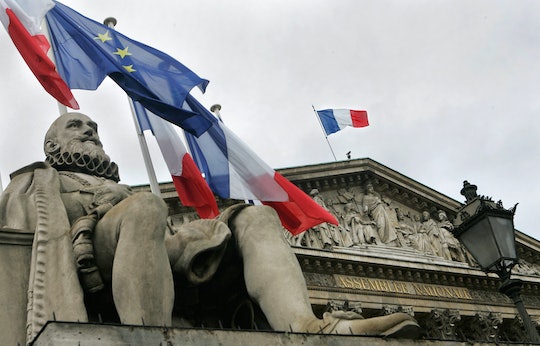 French Prime Minister Édouard Philippe has made the ultimate pro-vaccine statement, and the French government is insisting that the rest of the country follow suit. France's powerful stance on the anti-vaccine movement mandates that, by 2018, all French children have 11 vaccines. In an international climate where vaccine rights and requirements are hotly debated, Phillipe's gesture is a bold one, and its potential lasting effects can't be emphasized enough.

Before the recent change, just three vaccinations were required in France — those for diphtheria, tetanus, and poliomyelitis. Now, polio, pertussis, measles, mumps, rubella, hepatitis B, haemophilus influenzae bacteria, pneumococcus, and meningococcus C will be mandatory as well.

In an address to Parliament, Phillipe lamented that "children are still dying of measles," even in the very "homeland of Pasteur," referencing Louis Pasteur. Pasteur, one of the first vaccine creators, was a French scientist who formulated the initial rabies and anthrax vaccines.

Phillipe's measles claim is terribly sad but true, with a current total of 35 preventable measles deaths spread across Europe in 2017. This year's European measles outbreak has affected Italy, Romania, France, Germany, Italy, Poland, Romania, Switzerland, and Ukraine, and low vaccination rates — defined as falling below 95 percent of a population — are to blame. By requiring the measles vaccine, as well as some key others, France hopes to curb these numbers drastically, preventing future outbreaks and keeping its children that much safer.

As you might imagine, France isn't the only country in Europe looking to stop anti-vaccine tides with legislation. Italy's new vaccination laws require 12 vaccines for children, and warn that fines and rejections from school admittance are imminent, should parents not comply.

So why the need for legal vaccine requirements? Before the policy was passed, French Minister for Health Agnès Buzyn explained, “I hate coercion, it is not in my temperament. But there is an urgency.” To Buzyn, compulsory vaccines were seen as key to France’s future. “There are times when obligation is a good thing to allow society to evolve,” she explained to news outlet Le Parisien. What's more, a recent survey found that three out of 10 French people don't actually trust vaccines, with barely half of respondents acknowledging that vaccine benefits outweigh vaccine risks.

The anti-vaccine movement warns of a perceived link between vaccines and Autism, which time and time again has been rejected by every major health organization. In order to promote safer societies, a certain threshold of vaccinated citizens is required, and this amount is non-negotiable. In order to maintain this standard, France saw legislation as its most effective option.