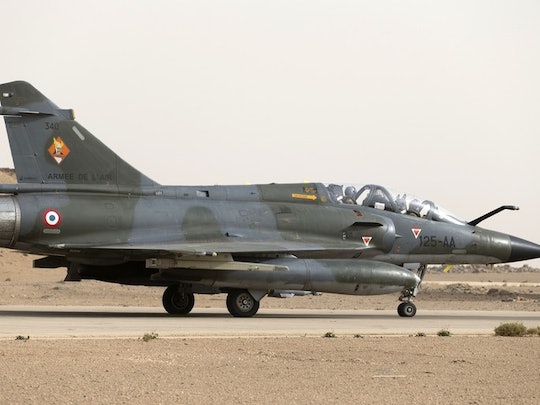 Not two days after the Paris terror attacks that left at 130 dead and over 350 people injured, France launched airstrikes on ISIS in Syria Sunday. According to the Associate Press, the French military sent a total of 10 fighter jets to drop 20 bombs on an ISIS stronghold in Raqqa, Syria, targeting a command and control center, a training camp, a munitions depot, and a jihadi recruitment center.

Refugees have been fleeing Raqqa, the seat of ISIS' self-declared government, which has been rapidly expanding across Syria since early 2014. The militant group, attempting to spread Sharia law across the nation and fighting the national forces of President Bashar al-Assad's government, entered the country when it was already turbulent due to internal conflict.

ISIS recently took responsibility for the Paris attacks, and said on social media, "France needs to know it remains at the top of the target list of the Islamic State," and threatened to continue its attacks. More details have recently emerged regarding the Paris attacks, and officials have stated that the attackers communicated with ISIS members in Syria, and one was known to authorities as having radical inclinations.

In a televised address Saturday, French President Françoise Hollande said the Paris attacks were an "act of war" organized by ISIS, and said the country "must take appropriate action." The US pledged to support France, and said Sunday that the United States would redouble efforts to crack down on terrorism and bring peace to the area.

With the G20 Antalya summit currently convening in Turkey, the world is expecting heightened talks regarding ISIS and the conflict in Syria — after which a renewed attack on ISIS is likely to take place, with increased effort from France, the United States, and its allies.