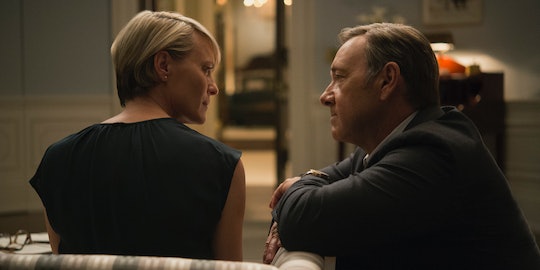 (Spoilers for Episode 10 - 13 of House of Cards Season 4.) The relationship between Frank and Claire Underwood on House of Cards has always been complicated. The two have always been looking for the next way to gain power, and more often than not, that meant hurting the other. At the end of Season 3 of House of Cards, Claire left Frank. Now, an entire season later, the two might have found what works for them — Claire and Frank Underwood are now in an open marriage.

At the end of Season 3, things were looking grim for the Underwoods. Claire decided to leave Frank, which would majorly tarnish his campaign if the word got out. At the top of Season 4, the two were at their wits end with each other — Frank was lucky if he got through to Claire on the phone. And then, Claire took a shot at Frank's campaign with the KKK billboard, which seemed to put the final nail in the coffin for this relationship, right?

Wrong, because these two need each other. Claire, while powerful, needs Frank's presidential power to lay the ground work for her world takeover (that's what she has planned, right?). Frank, on the other hand, needs to keep a solid image. He needs someone by his side, and Claire is that person for him. There's only one problem, Claire seems to develop feelings for Tom Yates, the novelist.

After Claire's mother died, Claire and Tom shared a romantic night together. At this point, Tom was working as a speechwriter for the Underwood camp, but after sleeping together, Claire decided it probably was for the best if he no longer worked for them.

Frank then suggests that Tom stays on as a speechwriter — at least, that's what everyone will think he is. Instead, he'll be a companion, and lover, for Claire. He'll be everything Frank can't give her (and in their marriage, that's basically everything). Essentially, Frank offers up an open marriage agreement to Claire, as long as she's careful about it. He wants her to do what's right for her, since he knows he can't give her everything she needs.

It's crazy, but mostly because it might actually work. As strange as it was to see Yates, Frank, and Claire eating sliced apples at the breakfast table together, this arrangement might actually be a good thing for the Underwoods. They need each other, yes, but not in a romantic way. It's big of Frank to know that he can't do that for Claire. Instead of her animosity towards Frank growing and growing, this agreement might actually make her happy.