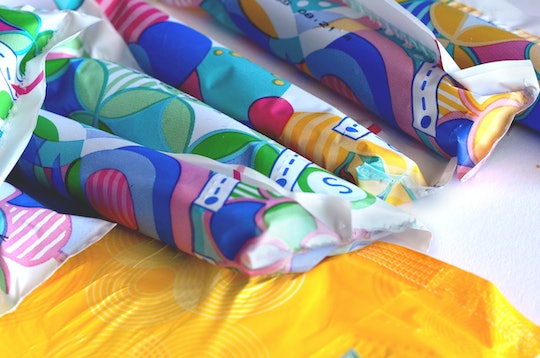 When students in Boston return to school this fall, they'll no longer have to worry about bringing tampons and pads with them. That's because a new program providing Boston Public Schools students with free menstrual products is launching just as the upcoming school year begins and, hopefully, more schools across the country will follow suit.

Earlier this week, Boston Public Schools announced that it's launching a pilot program that will bring free menstrual supplies to 77 different schools in the district for students in grade 6 through grade 12. These menstrual products will be distributed to the nurses offices throughout the schools and will be replenished as needed, thanks to a $100,000 investment from the city to get the program running. Once the program is officially launched in the fall of the 2019 school year, select teachers will also be able to hand out menstrual supplies.

"I'm grateful to Mayor Walsh for funding this important program, and making sure that girls in BPS don't have to choose between taking care of their health and going to class," Laura Perille, Interim BPS Superintendent, said in a press release regarding to the program. "Offering free, accessible menstrual supplies often means that more students will have access to the supplies they need, and are able to stay in class and focus on their education."

Programs like these are long overdue, as a survey conducted by the feminine hygiene product brand Always found that nearly 1 in 5 girls in the United States have left school early or missed school due to their lack of access to menstrual products.

It's also important to note that menstrual products aren't cheap and not all young women, or their families, can easily afford them. In fact, Jezebel estimates that the average woman will spend around $120 a year on pads and tampons, as well as $20 per year on pain relievers to help with menstrual cramps and other period symptoms, like bloating.

Boston Public Schools officials aren't the only ones who are taking steps to ensure students have access to these basic hygiene products. For instance, schools in New York City adopted a program like this in 2016, according to Education Week, and the entire state followed suit at the beginning of the school year in 2018 when Gov. Andrew Cuomo signed a law requiring all school districts to provide free feminine hygiene products in bathrooms to students in grades 6 through 12.

Needless to say, people are thrilled to hear about Boston Public Schools' pilot program. "It's about time. The worst experience for a young girl is to start at school and not know what is happening and not having supplies," one person tweeted.

Another said on Twitter, "Definitely not the worst idea and nice to Boston thinking outside the box," while one more chimed in, "About time! Go Boston."

While the program is certainly a step in the right direction, some have called it "a bit antiquated," arguing that the products should simply be placed in the restrooms, not the nurses office or given out at a teacher's discretion, as the Boston Globe reported.

"Our young people did not want to be in a situation where they had to go to an educator, particularly a male educator," Manikka Bowman, a school committee member, told the Boston Globe. "We are trying to put girls in a position where they can take care of themselves on their own terms."

While there's always room for improvement, Boston Public Schools' pilot program is certainly a step in the right direction. Hopefully other schools will take notice and launch similar programs because, to put it simply, young women in school shouldn't have to worry about getting the necessary and basic products they need for their periods.