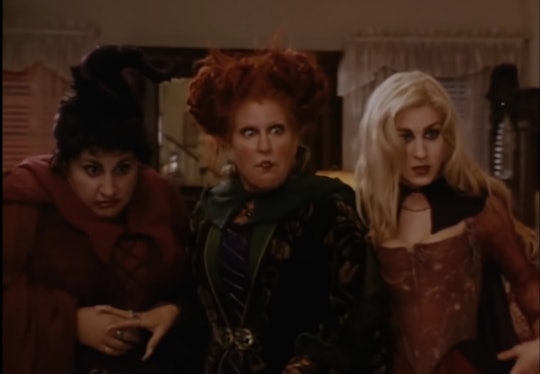 Every year, a number of parents succumb to the Halloween candy overload. But this year, Freeform is offering Halloween fans a healthier way to indulge in its 31 Nights of Halloween. Whether you're looking for a film that's age-appropriate and spooky good fun to watch with the kids or a nightmare-inducing thriller to watch after the little ones have gone to bed, Freeform's 31 Nights of Halloween lineup has you covered with a full month of visual treats.

"Whether you prefer your Halloween movies to be macabre fun or frightful bone-chillers, we've got you covered this October," Freeform said in a blog post announcing its official 31 Nights Of Halloween programming lineup. Why 31 you ask? Well, if Christmas gets 12 days, it's only fair then that Halloween get 31 nights.

Freeform is scheduled to kick off a month of Halloween classics on Oct. 1 with Willy Wonka & the Chocolate Factory. Released in 1971, the film stars Gene Wilder as Willy Wonka, a mysterious confectioner who hides five highly-coveted golden tickets in chocolate bars, spurring a frantic search by those eager to gain entry to Wonka's chocolate factory. Freeform will also air Charlie and the Chocolate Factory, a musical reinterpretation of the original novel and film that was directed by Tim Burton and stars Johnny Depp as Willy Wonka, later in the month.

The spooks continue with Halloween classics like The Nightmare Before Christmas, Edward Scissorhands, The Addams Family, and Hocus Pocus. In fact, fans of Hocus Pocus can expect to see the film aired a record 27 times on Freeform during the month of October as, according to Entertainment Weekly, the Walt Disney Television-owned channel owns the exclusive broadcast rights to the film.

Widely considered to be a Halloween cult classic, Hocus Pocus tells the story of a young boy and his sister who accidentally awaken the Sanderson sisters, a trio of witches played by Bette Midler, Sarah Jessica Parker, and Kathy Najimy who were thought to have been executed in the 17th century. The film follows the kids as they try to stop the Sanderson sisters from stealing the youthfulness of from the town's children and ultimately send the witches back to the grave.

Freeform's 31 Nights of Halloween will also feature both Ghostbusters and Ghostbusters 2 as well as a number of The Simpsons: Treehouse of Horror episodes and Disney Pixar films, including Finding Nemo, Finding Dory, Monsters, Inc., The Incredibles, and Toy Story of TERROR! If scares are more your speed, you'll want to tune in on Oct. 12, 18, or 28 for Freeform's "Scream-a-thon," which will feature all three of the Scream movies played back-to-back.

And for those afraid that Freeform's October lineup will have you or your kids quickly tired of Halloween movies (as if such a thing was even possible), USA Today has noted that the channel has included more than one non-Halloween film. Iron Man, Hook, Mrs. Doubtfire, Matilda, Moana, National Treasure, and Zootopia are all scheduled to air at various times during Freeform's 31 Nights of Halloween.

You can view the complete schedule for Freeform's 31 Nights of Halloween on its website.