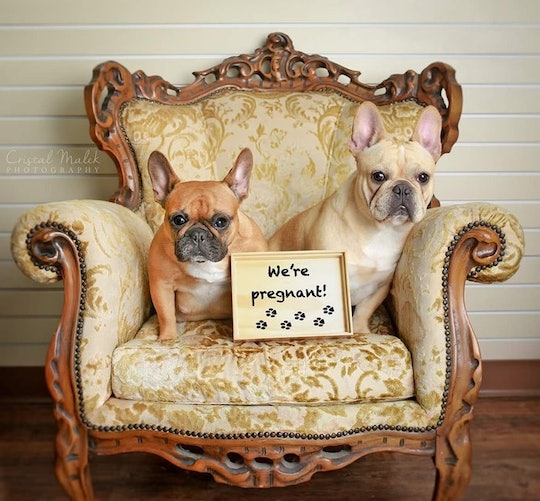 Everybody loves news of a baby, especially when it’s of a whole litter of them. Puppies, that is. And now that one Texas dog owner shared her pups' good news with the world through an adorable maternity shoot featuring her two French bulldogs — perfectly named Cozette and Boudreaux — it's gone viral.

The expectant pup parents recently posed for photographer Cristal Malek, who shared the sweet results of the photo shoot on her business’s Facebook page on Sept. 9. "And they call it puppy love," she captioned the post.

Malek tells Romper that the adorable idea came about because Cozette and Boudreaux are like kids to owner Crystal Canion. "Like all moms we want to celebrate our kids milestones and Cozette & Boudreaux are Crystals' kids so she contacted me and wanted to commemorate the pregnancy," Malek tells Romper via email adding that they "had a blast in [the] studio."

The images include the doggy couple posing with a sign announcing “We’re pregnant!” sharing a cute smooch, Cozette reading What To Expect When You’re Expecting, and Canion’s hands forming a heart on Cozette’s belly. The whole thing perfectly mirrors what a human couple might choose for their own maternity shoot.

Malek told KTRK News that this wasn’t her first photo shoot with dogs, but it was definitely her first maternity shoot featuring pups. And things went about as perfectly as she could want. "Cozette loves to dress up & she appeared to really enjoy herself giving kisses and wagging her tail happily throughout the entire session," Malek tells Romper.

Malek also shared that to get Cozette to cooperate with all her ideas, she had to use a little bribery, though she didn’t have to twist any arms, err, paws. "Cozette is a natural star. We were able to get her to do the poses with verbal commands or offering a reward but some she just naturally did," she says. "To capture the What To Expect book pose we tucked a treat down below the pages and she was very happy to comply."

When asked how she’s responding to the experience of going viral, Malek says all the attention has come as a surprise and that it's "been exciting to watch the images take on a life of their own."

This isn’t the first French bulldog who has become an internet sensation, though it might be the first bulldog couple. In April 2019, a baby Frenchie got her own newborn photo shoot, which also made the social media rounds, Sacramento’s KCRA reported at the time. The puppy, adorably named Olive, was photographed in all the traditional poses, like swaddled and napping, inside a basket, and close-ups off her little puppy features. (If you need a little extra cuteness, be sure to check out the photos on Olive’s Instagram page.)

Could a newborn litter shoot be in Cozette and Boudreaux's future? We’ll just have to wait and see. Until then, these photos are certainly brightening people's days, something Malek appreciates. "Knowing the images are bringing joy to so many people has been rewarding,'' Malek tells Romper. "My kids can’t stop talking about it."