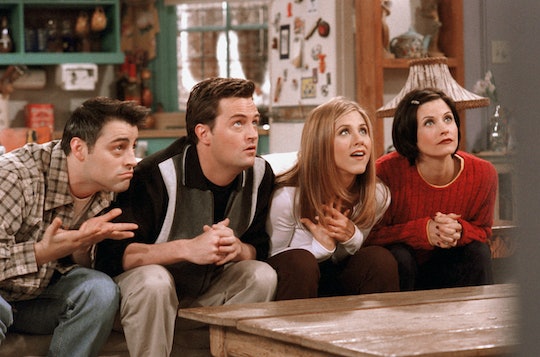 'Friends' Is Hitting Movie Theaters For Its 25th Anniversary, So Mark Your Calendars

Some things only get better with age, a sentiment that arguably applies to the '90s sitcom Friends. I feel confident saying this because my bigger kids have discovered it, memorizing almost every episode better than I ever did. And if you share my love for this show, you might be psyched to learn that Friends is coming to movie theaters in honor of its 25th anniversary. Mark your calendars ASAP, folks.

The special big screen event will happen kick off Monday, Sept. 23 and will feature screenings on Saturday, Sept. 28 and Wednesday, Oct. 2 across 1,000 movie theaters across the United States, according to a press release. Each screening will include four different episodes, plus exclusive cast comments and new behind-the-scenes content. It's unclear whether this bonus material will include unearthed bloopers or new footage, but I can't wait to find out.

Fathom events, the company coordinating this perfect moms night out, noted in a press release that each screening will include four unique Friends episodes, all of which have been "newly remastered in 4K from the original 35mm camera negatives." Translation: expect better image quality this time around.

All of this news is very exciting, a sentiment Warner Bros. Television Group President & Chief Marketing Officer Lisa Gregorian noted in a press release. "It is so amazing to know that the series is still bringing people of all ages together," Gregorian said, according to E! News. "We could not be more excited to deliver these digitally remastered episodes to theaters — for the first time ever! — so that together, in a shared experience, our loyal fans can enjoy some of their favorite Friends scenes in a new way.”

I think this 25th anniversary (the first episode aired Sept. 22, 1994) idea is genius, from a marketing standpoint and as a personal fan. It's a great way to take advantage of the excitement out there — my kids, for instance, have begged to tour the original set, which is located at the Warner Bros. Studio in Burbank, California. And these screenings may be an easier (and less expensive) way to give them a better sense of the show.

So, how can you snag tickets to "Friends 25th: The One With The Anniversary"? Starting on Friday, Aug. 16, you can purchase tickets from Fathom Event's website. The list of theaters participating in the event are forthcoming.

I don't know about you guys, but I'm thrilled for this event because as far as I'm concerned, we've been on a break from this show for far too long. And on that note, make sure to mark your calendars ASAP so you don't miss out on this celebration.