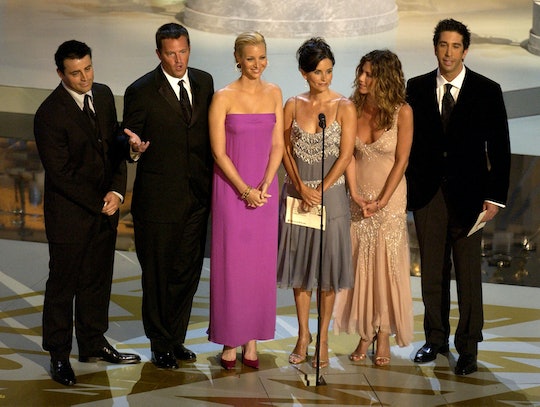 If you turn to Netflix for heavy doses of your favorite ‘90 sitcom, there is some bad news on the horizon. WarnerMedia confirmed that it’s pulling its content from the streamer to offer it on HBO Max, their new streaming platform which launches in 2020. This means that Friends is leaving Netflix for HBO Max soon, and fans are taking to Twitter to share the pain.

As reported by People, WarnerMedia is launching the new subscription-based streaming service in spring of 2020, and it will feature shows like Friends, Pretty Little Liars, and The Fresh Prince of Bel Air. HBO Max will also offer new original series — including a Kaley Cuoco thriller titled The Flight Attendant and an animated reboot of Gremlins — and has signed new project production deals with Reese Witherspoon and Greg Berlanti.

“HBO Max will bring together the diverse riches of WarnerMedia to create programming and user experiences not seen before in a streaming platform,” Robert Greenblatt, chairman of WarnerMedia Entertainment and Direct-to-Consumer said in a statement. “HBO’s world-class programming leads the way, the quality of which will be the guiding principle for our new array of Max Originals, our exciting acquisitions, and the very best of the Warner Bros. libraries, starting with the phenomenon that is Friends.”

According to People, Friends was scheduled to leave Netflix on Jan. 1 2019, but after fans revolted, Netflix paid $100 million to keep the series on their platform for another year. “The Holiday Armadillo has granted your wish,” Netflix tweeted last December. “Friends will still be there for you in the US throughout 2019.”

But just today, the streamer pulled the bandage and shared the bad news with fans. “The One Where We Have To Say Goodbye,” tweeted Netflix. “We’re sorry to see Friends go to Warner's streaming service at the beginning of 2020 (in The US). Thanks for the memories, gang.”

Fans have known for a while that Friends would leave Netflix, but the heartache couldn’t be any less real. People took to Twitter to share their disappointment.

I can see where the angst is coming from. Friends is like my white noise. I turn on Netflix and watch episode after episode while doing anything around the house. Not having it available on my favorite streamer is definitely going to suck.

But it's a reality TV watchers will have to adjust to. Hulu, Amazon Prime, and Netflix may offer most of your favorite content right now, but when HBO Max and Disney’s streaming service (Disney+) launch, you might see many of those shows and films move. As reported by Entertainment Weekly, HBO Max will be getting programming from TBS and The CW among others, which means shows like The Flash and The Last O.G. will probably be leaving Netflix as well.

The streaming game is changing, and viewers will just have to get used to the idea of paying for multiple different services to watch the content they want. So, if you want to continue watching Friends, you’ll have to subscribe to HBO Max in 2020, or pick up the 10-season DVD box set and make it your digital lobster forever.