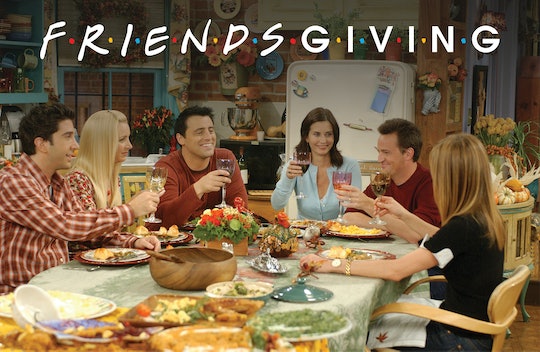 Grab Your Lobster! Your Fav 'Friends' Thanksgiving Episodes Are Coming To Theaters

While Thanksgiving is a time to gather with family, Friendsgiving is where we indulge with friends. But this year, you'll find your friends aren't gathered around the table, they'll be at the movies. That's because Friends Thanksgiving episodes will play in theaters across the United States for a limited time. And, no, this could not be any more exciting for Friends fanatics.

In a continued celebration of Friends' 25th anniversary, Fathom Events is bringing a number of Thanksgiving-themed episodes of the popular NBC sitcom to the big screen. But, like any holiday, Friendsgiving won't last long. In fact you'll only be able to catch Friends on the big screen on Nov. 24 at 7 p.m. and Nov. 25 at 4 p.m. and 7 p.m.

As delicious as each episode is sure to be, viewers are cautioned to wear their stretchy pants as this Friendsgiving is an eight-course meal all told. According to Fathom Events, participating theaters will play four unique episodes of the sitcom (all digitally remastered in 4k from their original 35mm camera negative for the big screen) each day.

On the first night of Friendsgiving, there'll be "The One Where Underdog Gets Away," which sees the gang get locked out of Monica and Rachel's apartment when they go to see an escaped Thanksgiving parade balloon. That will be followed up with "The One With The List," in which Ross writes out a list of pros and cons in an effort to decide if he should date Julie or Rachel. In "The One With The Football," the gang delays their Thanksgiving meal for a game of touch football that reignites an intense sibling rivalry between Monica and Ross. The first night of Friendsgiving is set to end with "The One With All The Thanksgivings," a flashback episode in which Monica, Ross, Chandler, Rachel, and Joey remember the worst Thanksgivings they've ever had.

The second night of Friendsgiving is set to kick off with "The One Where Ross Got High," giving up Rachel's unfortunate attempt at dessert making, Joey's willingness to eat anything, and revelations about the things Ross and Monica have managed to keep from their parents. That will be followed with "The One Where Chandler Doesn't Like Dogs," which sees a dog joins the gang for Thanksgiving, much to Chandler's dismay. In "The One With Rachel's Other Sister," Christina Applegate guest stars at Rachel's self-centered sister. And finally, "The One With The Late Thanksgiving," sees Monica hesitant to cook a Thanksgiving dinner before receiving life-changing news.

While gangs around the world have been hosting friendsgivings for ages, the idea for Friendsgiving was born after a pop-up Friends experience in New York proved massively popular, drawing more than 200,000 viewers, according to CNN. "Fans showed up in full force for our initial Friends screenings, so we know there is demand for more," Fathom Events CEO Ray Nutt said in a recent statement. "We're excited to put eight classic episodes on the big screen for fans to celebrate with their friends, just in time for Thanksgiving."

You can nab your tickets for Friendsgiving online at Fathom Events and all participating theater box offices beginning Nov. 1. to spend Thanksgiving with Monica, Rachel, Phoebe, Chandler, Ross and Joey.