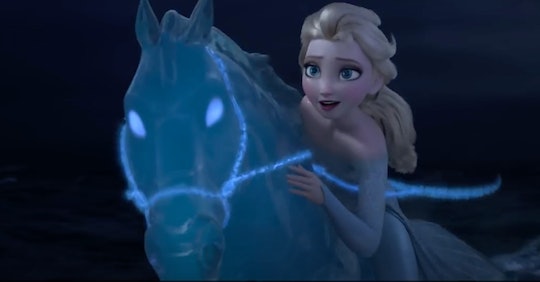 If your kids are curious about how the magic behind Elsa, Anna, Olaf and more came to be, they'll certainly enjoy the new Frozen 2 docuseries coming to Disney+ this summer. The upcoming series will provide an up-close, behind-the-scenes look at the Frozen sequel and give families a peek at how the beloved film came together.

All six episodes of Into The Unknown: Making Frozen 2 will premiere on Disney+ on Friday, June 26, featuring interviews with the cast and the creative team behind it. Each episode will be around 30 to 40 minutes long, according to Inside The Magic.

Viewers will be able to even step inside of the recording booth with the actors from Frozen 2. Josh Gad, the voice behind Olaf, told Good Morning America on Wednesday that having cameras document this process was a little intimidating and nerve-wracking at first, but it ultimately became "a part of the process" while recording the second film. Viewers will also get to see how Gad came up with that iconic "Samantha" line from the sequel.

A brief behind-the-scenes look at Frozen 2, posted to YouTube in back December, gives fans a taste of what's to come from the six-part series.

While families have been spending much more time at home during the ongoing pandemic, Disney fans have been treated to a few Frozen gems. Every week, Walt Disney Animation Studios has been releasing a Frozen short starring Olaf called "At Home With Olaf". Gad even recorded a brand new Olaf song released on Wednesday called "I Am With You" that highlights how people can be there for each other even if they have to be away from one another at the moment.

There is plenty more Olaf, Anna, and Elsa to go around when Into The Unknown: Making Frozen 2 premieres on Disney+ on June 26. Until then, you can continue to stream Frozen and Frozen 2 on Disney+ again and again.