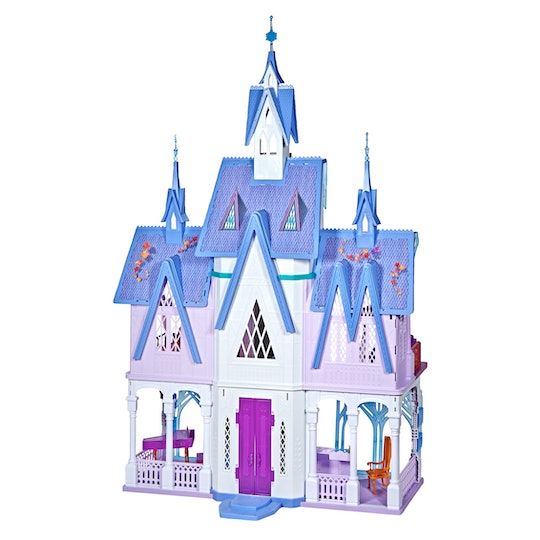 I'd Like To Move Into This 'Frozen 2' 5-Foot Tall Interactive Arendelle Castle, Plz

In case you haven't heard, there's a little sequel coming to a theater near you this fall. Disney's Frozen 2 — perhaps you've heard of it? The second installment of the massively successful animated film Frozen will be hitting theaters on Nov. 22, and along with the movie, of course, comes the merchandise. One of its biggest offerings, the Disney Frozen Ultimate Arendelle Castle Playset ($199.99), will be available in stores and online this fall. And with the holidays right around the corner, well, Santa might want to take note.

Inspired by Anna and Elsa's magical world, the Ultimate Arendelle Castle Playset is a feature-filled and imagination-inducing structure that Frozen fans everywhere are going to love. Upon opening the doors of this playset, your child will find the castle's four floors which consist of seven rooms: the kitchen, music room, and throne room on the first floor, a vanity room and bedrooms for Anna and Elsa on the second floor, a library on the third floor, and a lookout tower at the top. The castle playset stands 5 feet tall and 4 feet wide, and includes 14 accessories to fill it up, among them a piano, throne, banquet table, vanity, and sofa. Interactive parts include pushing a button on the moving balcony, which reveals a colorful light show inspired by the Northern Lights, and pulling out an extended carpet in front of Elsa's throne. Not too shabby, Elsa and Anna!

Like many of you, I'm sure, Frozen has been played on our TV a million times, and everyone in my house, including my husband, can sing all the words to "Let it Go" and "Do You Want to Build a Snowman?" in our sleep. Frozen was my older daughter's first movie, so Anna, Elsa and friends will always have a special place in our hearts. Not to mention, I love the fact that Disney chose to highlight the love of sisters and family over another prince meets princess story (snore). What a perfect twist in a film that already had us completely engaged and excited for what would become of snow-covered Arendelle. Speaking of which, have you seen the latest trailer for Frozen 2? Oh my, it's going to be an adventure, and we all get to come along for the ride.

While we don't know every detail of the new film's plot, I did a little digging and found out that Frozen 2 takes up three years after the events of the original story. Co-director Chris Buck told Digital Spy that "the sequel will see the next evolution in the lives of the series' stars Anna, Kristoff, and Olaf" as Anna and Elsa face a dangerous quest into the past involving a magical forest. I also discovered that Kristoff, voiced by the fantastic Jonathan Groff, will get to sing in this film. So exciting! Singing is just one of the many talents of Groff, who played King George in the original cast of Hamilton and will be in Little Shop of Horrors on Broadway this winter.

Needless to say, an exciting adventure awaits in Frozen 2, as well as hours of imaginative play with your children's favorite Frozen toys. Additional products being released include new Elsa, Anna, and Kristoff fashion dolls, new outfits, a sled for Sven, and a "talk and glow" Olaf. I'm pretty sure they'd store quite nicely in a new castle! The Ultimate Arendelle Castle Playset requires 3xAAA batteries (not included). As stated above, it's available this fall at most major retailers.