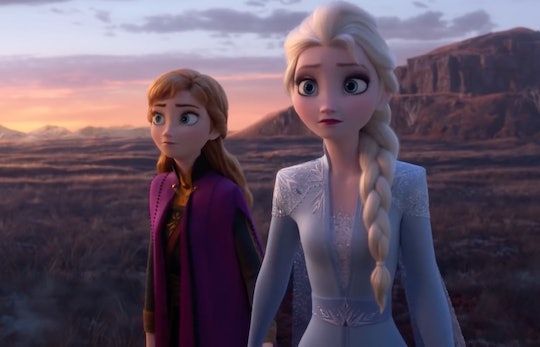 At last, the first glimpse of the song that will undoubtedly be stuck in our heads for the rest of the foreseeable future has arrived. Returning with yet another super hit power ballad, Frozen 2's new song "Into The Unknown" is officially the new "Let It Go," and once you hear it, you'll be singing along already.

On Sept. 30, Disney released one of the very first looks at the upcoming sequel to its blockbuster hit Frozen. And so far, it looks as amazing as the first. Most notably? Idina Menzel returns as Elsa, and belts out some pretty impressive rifts as her character takes on new and more daring feats. "Every day it's a little harder/as I feel my power grow/Don't you know there's part of me that longs to go," Menzel begins singing. "Into the unknown/Into the unknown/Into the unknown," with notes reaching higher and higher, similar to how "Let It Go" sounded.

The teaser also gave away some plot points as well, including some of the adventures that Elsa and Anna embark on in order to better understand what really happened in their past.

After months of anticipation, Frozen 2 will officially be in theaters next month, according to the BBC. The film is set to premiere on Nov. 22, so mark your calendars.

The second film in what could very well turn into a franchise will revisit sisters Anna and Elsa at the beginning of a challenging adventure. Together, they're informed that the forest of Arendelle is haunted, and thanks to information from their father, could "wake" again, as it did before, and jeopardize the safety of the entire kingdom, Collider reported.

As Elsa is called to follow the "voices" that she hears, leading her into the heart of danger, she's confronted with challenge after challenge, and yet she must persevere. With this context, the new song seems to make more and more sense.

As for what other music you can expect to find in the film, Pedestrian.tv reported that Disney also revealed the official soundtrack for the film, which includes 11 songs from some of your favorite artists, such as Evan Rachel Wood, Panic! At The Disco, and Weezer. According to Rolling Stone, the Frozen 2 soundtrack is as follows:

With just under two months until the movie officially hits theaters, Disney fans have a lot to chew over and get excited about. For now, I'll be playing this teaser of "Into The Unknown" on repeat...