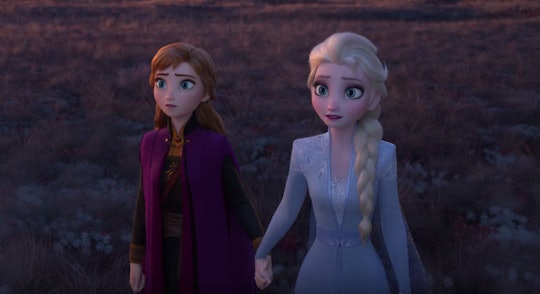 An Incredible New 'Frozen 2' Trailer Is Here, So Drop Everything — VIDEO

The moment Disney fans have been waiting for has arrived! No, Frozen 2 isn't out in theaters yet, although that will be happening in November. But it's the next best thing: A new official trailer. On Tuesday a new Frozen 2 trailer dropped and it shows that Elsa and Anna will be embarking on a mystical and perhaps darker new adventure in the animated film's sequel.

The newest trailer debuted on June 11 on Good Morning America, as E! News reported. And it looks like our beloved Frozen characters will be leaving Arendelle for an important journey. "Elsa, the past is not what it seems," a troll says in the new video. "You must find the truth. Go North, across the enchanted lands and into the unknown. But be careful. We have always feared Elsa's powers were too much for this world. Now, we must hope they are enough." Anna then promises, "I won't let anything happen to her."

OMG, what?! What isn't "like it seems" about Elsa's past? Where are they going and what are they attempting to do? Nov. 22 needs to get here ASAP.

Seriously, check out the 2-minute trailer, below. Because it looks like Elsa, Anna, Kristoff, Sven, and Olaf are in for a wild ride.

From the looks of it it, Twitter reactions were enthusiastic. Plenty of commenters were in awe of the stunning visuals and animation. One Twitter user declared, "THIS MOVIE IS SO PRETTY."

Another person wrote, "OMG OMG it's so beautiful, I'm so eager to watch it in November! Disney!!! #Frozen2 is gorgeous!"

Others fell in love with that dress Elsa was wearing. One Twitter use commented, "Elsa in purple looks so good." (And I mean, I have to agree.)

And it looks like plenty of people are still holding onto the hope that Elsa will find a female lover in the sequel. "Ok but where is elsa’s girlfriend?" one person asked.

Another person announced, "So, that purple fire I'm calling it the Lesbian fire. U can't stop me." LOL.

Still others couldn't help but notice Elsa created what appears to be a horse patronus? One Twitter user shared a clip of the trailer, writing, "EXPECTO PATRONUM."

"Elsa has a patronus and i’m all for it," another wrote.

As Entertainment Weekly reported, a new Frozen 2 movie poster was released on Monday. Actress Kristen Bell (who voices Anna) shared it on Instagram, writing, "Check back in tomorrow for a tasty Frozen treat :) :) :)."

Disney offered fans a first look at the upcoming sequel back in February, Entertainment Tonight reported. The teaser trailer began with a similar sequence involving Elsa using her powers to walk across the ocean's waves. And although it was clear the characters would be leaving Arendelle on some epic journey, the teaser didn't reveal too much about the plot

What we do know is Idina Menzel, Kristen Bell, Jonathan Groff, and Josh Gad are reprising their roles for Frozen 2. Directors Jennifer Lee and Chris Buck, as well as songwriters Kristen Anderson-Lopez and Robert Lopez have returned for Frozen 2, as well. Newcomers Evan Rachel Wood and Sterling K.Brown will be joining the cast.

After seeing the mesmerizing official trailer for Frozen 2, all I have to say is: It Nov. 22 yet?