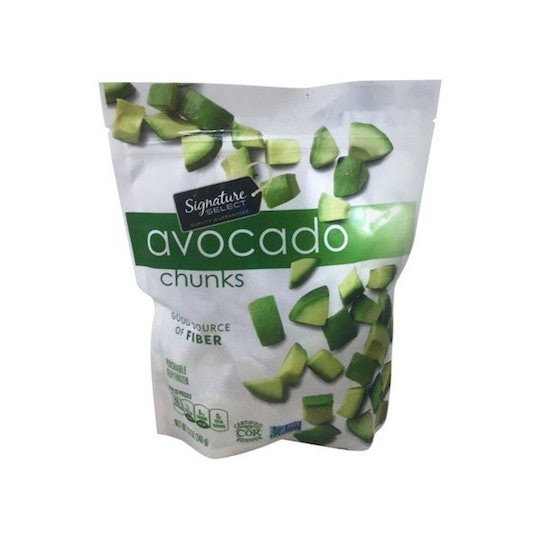 Avocados, whether spread on toast or mashed in guacamole, are one of America's most favorite fruits. But fresh ones have a very short shelf live and just one day past ripe can lead to brown spots and inedible results. That's why frozen avocados have been gaining popularity in recent years. In fact, you might have some in your freezer right now — though you might want to check on them, because they could make you sick. Frozen avocados are being recalled nationwide from several stores due to listeria concerns.

Nature’s Touch Frozen Foods Inc. is recalling “Signature Select Avocado Chunks” with a best before date of Oct 11, 2020, due to concerns of listeria contamination, according to Food Safety News.

Random testing found the harmful bacteria's presence. While there have been no reported sicknesses, Nature's Touch is implementing the recall out of an abundance of caution, according to a statement by the company.

The recalled products have the following package information:

Customers are urged to discard the product or return it to the store of purchase for a full refund. Any additional question can be answer via the company's Customer Service line at 877-850-2664 between Monday to Friday 9 a.m. to 9 p.m. EST or by email at: info@naturestouch.ca.

Listeria is a harmful bacteria that is contracted via food contamination. For example, when someone has food poisoning, it's usually because of listeria, according to Better Health. Symptoms include nausea, vomiting, diarrhea, achy muscles, and fever.

While most people recover from listeria poisoning, it can cause potentially deadly infections in young children, frail or elderly people, and those with weakened immune systems, according to WebMD.

Both conditions are especially dangerous for pregnant women, because infections from listeria have been linked to stillborn deaths and miscarriages, according to the FDA.

Fear of listeria poisoning is one of the reasons doctors tell pregnant women to stay away from deli meats and soft cheeses, according to The American Pregnancy Association.

In a small portion of people, about 20 percent, it can turn into listeriosis when the infection enters your nervous system, according to The Center for Disease Control. This is a much more serious condition, which includes symptoms like a stiff neck, loss of balance, convulsions, confusion, and headaches.

In the past month alone hamburger, frozen chicken tenders, hot dogs, produce and more, according to the United States Department of Agriculture.

And if it seems like the news headlines have been dominated by recall alerts, you aren't alone, according to Time. Many companies are putting out voluntary recalls, which means they want to get all the products off the shelves before someone gets sick. Also, testing and tracing methods are becoming more advanced. Overall it's a good thing for consumers.

Is anything safe to eat anymore? Of course, but with all the recall alerts popping up it's easy to start assuming everything you put in your mouth might be tainted. Always stay up to date on recalls and check with your local grocery store for other alternatives to recalled foods. It's better to be safe than sorry, especially when sorry comes with a bad case of food poisoning.