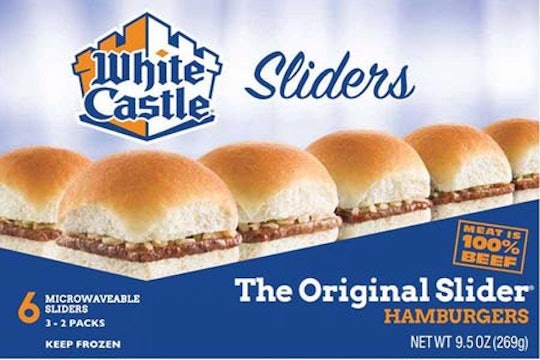 Before popping your favorite late night bite into the microwave, you'll want to have a close look at your mini-burger stash. On Monday, White Castle voluntarily recalled some frozen burgers due to concerns they may be contaminated with listeria.

While it's unclear where exactly the recalled burgers were sold, you can tell if your frozen White Castle burgers are a part of this recall by looking for the "best by" dates. According to the FDA, the recalled items have best by dates ranging between Aug. 4, 2020 to Aug. 17, 2020. The recalled burgers can also be identified by the lot code, which is located on the side panel of the box. The FDA has a full list of these lot codes on its website for easy identification.

Romper's request for further comment from White Castle was not immediately returned, but the company's vice president, Jamie Richardson, said in a statement: "Our number one focus is the safety of our customers and our team members, and as a family owned business, we want to hold ourselves to the absolute highest standards of accountability in all aspects of our business — and especially food safety."

The voluntary recall was issued after a quality assurance test conducted by a third party laboratory found a presence of Listeria monocytogenes. The bacteria is found in food, can survive freezing temperatures, and can cause an infection that results in fever, muscle aches, and nausea, according to the Mayo Clinic. The elderly, pregnant women, and people with weakened immune systems are at the highest risk of getting infected, according to the U.S. Centers for Disease Control and Prevention.

After the problem was identified, White Castle stopped the shipment of this product from the facility. All production runs that have been impacted have been "identified for destruction". "This voluntary recall is precautionary and is the right thing to do," Richardson said in the statement. Additionally, the FDA noted that there have not been any reported illnesses associated with the recalled burgers.

Those who have a box or two of White Castle burgers in their freezer that meet the sell by date and lot code are urged to simply throw them away or return them to the store where they were purchased for a full refund. If you have any additional questions, you can contact White Castle directly at 800-843-2728.

More Like This
Baby-Led Weaning: A Comprehensive Guide To Introducing Solids
The FDA Is Worried People Are Cooking Chicken In NyQuil
New Report Shows 80% Of Pregnancy-Related Deaths Are Preventable
16 After-School Snacks For Hangry Kids