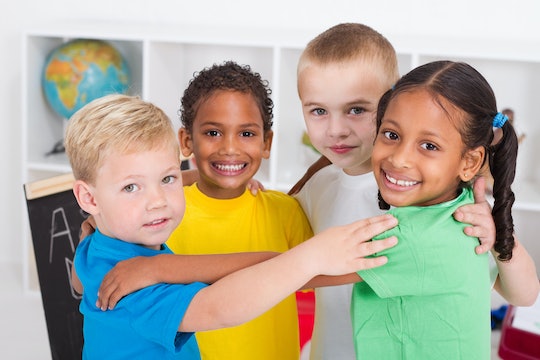 If you really think about it, the typical school model is incredibly daunting; kids are gone five days a week for seven to fight hours. Now, tradition might dictate that's just how things are done, but are these long hours really having a benefit? A new Hong Kong study found that full-day kindergarten kids aren't actually fairing better than their half-day counterparts.

What's most interesting, though, is South China Morning Post reported that the researchers then interviewed 300 parents. About seven out of ten wanted the option of whole day programming for their children, while eight out of ten said a longer school day would help with social and emotional development.

This might seem like enough to make a leap to only half day programming, but there are other factors to consider.

Researchers on this study still suggested implementing full day programming in schools. Why? One word: daycare.

"Hong Kong needs more ­family-based childcare. But some families with both parents ­working don’t have carers for their kids. It would be much better to have kids stay in school where teachers can guide them,” said ­research team leader Dr Li Hui, an ­associate professor of education, according to the South China Morning Post.

Like Hong Kong, the United States as a whole is really lacking when it comes to adequate childcare. According to Value Penguin, the cost of childcare in the United States is often comparable to annual tuition and fees at a public college within the same state. Overall, Quartz reported that a family "with a child under five with no special needs, no public assistance, and who is in daycare for at least eight hours a week" spends a median of $8,320 per year on childcare. That cost can vary, depending on location, amount of children in the family, and etc. But that base alone is a staggering cost.

The issue of shorter school days in the United States has been advocated for repeatedly with most proponents noting that, similar to Hong Kong, these long hours do not translate into educational benefits. The Observer noted that, according to the Center for Public Education, most states require students spend between 175 and 180 days in school. This can add up to between 900 to 1,000 hours per year.

To put that into perspective: the U.S. Office of Personal Management reported that full-time workers spend 2,080 hours annually on the clock. Essentially, school becomes comparable to a part time job, and that's only counting the instructional hours. Research found that highschool teachers assign about 3.5 hours of homework each week; that can add up to 17.5 hours when you remember highschool students have multiple teachers.

Of course, homework time varies across grade levels, but kindergarteners have started getting take home assignments as well. The same survey noted that kindergarten to fifth grade teachers assign about 2.5 hours of homework per week.

It's pretty clear that our regular school hours just aren't cutting it. But, in order to advocate for shorter hours, people then need to look into how parents will be able to cover childcare. This is especially important for low-income families, who may not be able to afford the extra daycare hours and don't have the option to shorten their work week.

Otherwise, despite research suggesting it has no real benefits, parents will have no choice but to stick to full-day school sessions.