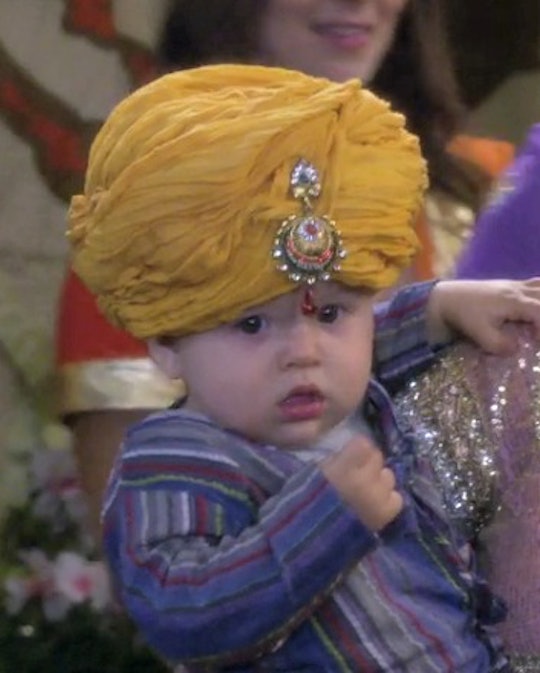 There are lots of fun aspects of Fuller House, the Netflix revival of Full House. But sometimes it crosses a line that makes you think you've been teleported back to 1987 when media sometimes just totally missed the mark on sensitivity, race, and the depiction of other cultures. In episode 11, "Partnerships in the Night," Fuller House appropriates Indian culture for a party scene, and while the show's writers probably didn't intend for it to be offensive, that's unfortunately how it's being perceived. You know how when you watch old sitcoms that rely on cultural stereotypes to make a joke, whether it's about the "inner city" or a family vacation to somewhere in Asia and you think, wow, I can't believe they did that. That's kind of how this scene came across to some viewers. Romper reached out to Netflix for comment on the episode but has not yet heard back.

It didn't have to be this way. The episode is all about Kimmy Gibbler and Stephanie throwing a retirement party for Dr. Harmon, D.J.'s boss. Except that he's not really "retiring," he's just returned from India and has decided to give up "all his earthly possessions," which he explains in a fake Indian accent. India is a federal parliamentary republic with a complicated, large, economic system. It is the ninth largest consumer market in the world. They buy lots of "earthly possessions." The stereotype that all Indians are laying around in savasana pose all day needs to go away.

This is unnecessary on so many levels. Firstly, cows are sacred to Hindus as a symbol of wealth and abundance. So to have one at a party that's supposed to be for a newfound Buddhist, giving away all of his possessions, is less than sensitive. Secondly, have you ever worked on a television set? Pour one out for all the production assistants who had to wrangle that poor animal around the Tanner abode.

At one point, the cast breaks into a Bollywood style group dance. Bollywood style itself is an amalgamation of a bunch of traditional folk dances. There is nothing wrong with a good dance party, but wouldn't you raise an eyebrow if every time another culture showed an "American" gathering, people were line dancing at a Donald Trump rally?

Everyone is dressed up in "traditional Indian" garb for the party, but they are way off. Turbans are mainly worn by Sikhs in India. In fact, if you Google "turban, meaning" that's actually in the definition of the headress. Go ahead, try it. People other than Muslims or Sikhs might don one for a wedding or something, but they are meant to cover the head for religious purposes.

Maybe these turbans aren't as offensive as they are dangerous (how is the baby holding his head up?), but the implication that to be "Indian" you have to be decked out in silk robes and headgear is troubling.

Viewers were quick to point out that something felt off about the episode:

Perhaps the mixture of all the varying symbols and traditions at the Fuller House party was simply intended as an homage to the wide array of cultures and religions within India itself. However, Indian viewers didn't perceive it that way, so this is a good opportunity for TV creators to learn how to more accurately and sensitively represent a variety of cultures. There's no need for representations that perpetuate harmful stereotypes, whether they were meant that way or not. Cut. It. Out.