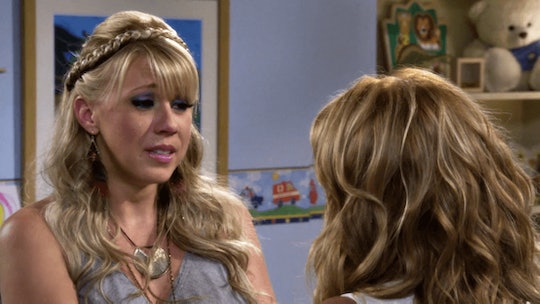 After binge-watching the entire first season of Fuller House on Netflix, I wasn't expecting the sugary feel-good sitcom revival to pack the emotional punch that it did — but there I was at the end of episode five, "Mad Max," sobbing all over my laptop. I felt like the air got sucked out of the room as Stephanie Tanner told her older sister D.J. through tears: "I can't have children." I felt this awful, almost sickening knot in my gut as Stephanie revealed her secret, because it's a pain I know all too well: I too, can't have children of my own. I never thought I'd see the day when the daughters of Full House would tackle an infertility storyline, but there it was.

Like a lot of women my age, I grew up with Full House. I was super pumped when Netflix said they were bringing the Tanner clan back in Fuller House. Jodie Sweetin, the actress who plays Stephanie Tanner, is only just a few months older than I am. But what really stung — when I watched Stephanie reveal her infertility to D.J. — was how closely her fictional plot line resembled my own real life. In the episode, after Stephanie drops her infertility bomb, D.J. immediately asks her little sister if she was OK. Through tears, Stephanie replies, "I just found out a while ago it's just not gonna happen for me," and then follows with: "I wasn't really thinking about starting a family then anyway."

When I was 26 years old, just barely over a year married to my high school sweetheart, I found out that children just wouldn't happen for me either. The news was especially surprising given that my husband and I weren't trying to conceive at the time. At 26, I found out that I would never be able to have kids with my own eggs. We weren't even thinking about starting our own family for at least another three years, but suddenly my premature ovarian failure (POF) diagnosis left us with very few family building options. My doctor was pretty matter of fact about what was ahead for me: I could use IVF with donor eggs, adopt, or choose to live childfree.

My infertility diagnosis nearly ruined me. So many dreams of waving around a positive pregnancy test and sharing the good news with my husband, of sporting a big round pregnant belly, of looking into the face of a child who looks just like me — all of that was gone, in an instant. I felt robbed. I felt cheated.

While Stephanie never names her actual infertility diagnosis, the finality of how she talks about it leads me to believe she and I could actually share the same POF diagnosis. Like I said, this episode of Fuller House really hit home.

Try as Hollywood might, the portrayal of infertility in film and TV is often a little — or a lot — off. Either it's some kind of apocalyptic end-game (think Children of Men) or it's a real knee-slapper (see: Baby Mama, The Babymakers, or The Switch). And when they aren't played to emotional extremes, infertility storylines tend to focus on exaggerated outcomes like Octomom-style multiples, or the "adoption makes it all better" magic wand*. I'm looking at you, The Odd Life of Timothy Green.

[*A brief sidebar: I am by no means knocking adoption, adoptees, or adoptive parents. But I raise this point because so many people think adoption "cures" infertility: It doesn't. Infertility is a disease, and adoption is not a medical cure. It's one incredibly beautiful, challenging, and expensive option to build a family, but it's an option that isn't comfortable or possible for everyone.]

There are a small number of films and TV shows that have managed to handle the subject of infertility with compassion and realism. Television shows like How I Met Your Mother, Giuliana & Bill, and even Downton Abbey spring to mind while films like Julie and Julia and Up make only passing references to infertility that say so much with so little. Case in point: these 10 seconds in the first 10 minutes of Pixar's Up:

How Fuller House Got Infertility Right

Whether or not you've personally experienced infertility or know someone who has — the Fuller House infertility scene is pretty emotional. But what stood out to me the most is the way it was written and performed with such deep compassion and love. At no point does D.J. say to her sister any of the most awful — and most common — responses to infertility, such as "Oh, you just need to relax!" or "Why don't you just adopt?" (For the record: "Just relax" is the worst thing you can say to a person with infertility.)

Instead, D.J. offers open arms of sisterly love and compassion as Stephanie breaks down. D.J. is immediately concerned about her sister's wellbeing — physically and emotionally — and offers her genuine condolences. "You should know that my kids are your kids," D.J. tells her little sister: "We love you." To be fair, much like adoption, nieces and nephews don't necessarily fill that void for an infertile aunt and some women might find that to be an unhelpful response. But D.J. doesn't cram unsolicited advice down Stephanie's throat, she doesn't blame her sister for her diagnosis — she doesn't even try to offer a solution in the moment like offering to donate her eggs. It's just warm, open, and loving in such a raw moment of heartbreak for the sisters.

Raw, too, is how Stephanie openly shares how badly she wants children, especially now that she's become so involved in the lives of her three nephews. There's a lot she doesn't say, too, like all those things that people with infertility want you to know. More than just a longing for motherhood, but the shame, the anxiety — as much as Stephanie opens up, you can tell there's a lot more she could say with how heavily her infertility weighs on her. It's a kind of visceral ache that only people who want children of their own but can't have them truly understand — and Sweetin's delivery of this painful scene is almost hard to watch in its brutal accuracy.

No matter how much or how little you think infertility appears in the media, here are the cold hard facts about infertility: one in eight couples struggle to get pregnant or stay pregnant. Infertility affects 7.4 million Americans. And even a healthy pregnant woman has a 10 to 25 percent chance of miscarrying.

Infertility is a disease that's shrouded in shame, secrecy, and silence. And even though plenty of celebrities and other public figures have come out about their own infertility struggles, it's still not a health topic that's been normalized or entirely mainstreamed. We don't have our ribbons. We don't have our Facebook "bra color" memes. But we have very real, very painful experiences about what it's like to live with infertility on a daily basis — experiences that don't typically receive a fair or balanced portrayal, if it even gets a mention at all in fictionalized media.

Fuller House just gave a very loud, very prominent, and very compassionately spoken voice to those one in eight, just like me. I'm exceptionally lucky: I got my Full House "bring it in for a hug" happy ending. Thanks to IVF and a dear friend, I'm the mom to one rad little boy.

Who knows if Stephanie might have the same good fortune to achieve motherhood for herself — there's still no word on whether Fuller House will get a second season or not. I hope she does, because I know what it's like to have been in her shoes: ashamed, confused, and scared — to want something so badly with every breath of your soul. I know Stephanie Tanner is just a fictional character, a nostalgic relic of my own childhood. But if I could, I'd give Stephanie a hug and thank her for being so brave to open up about her infertility. And I'd thank D.J. for being so supportive, loving, and receptive to such devastating news from her sister.

In a show defined by its good ol'fashioned family sitcom tropes, Fuller House just brought a level of realism to the infertility experience few shows can match — and I hope more will.