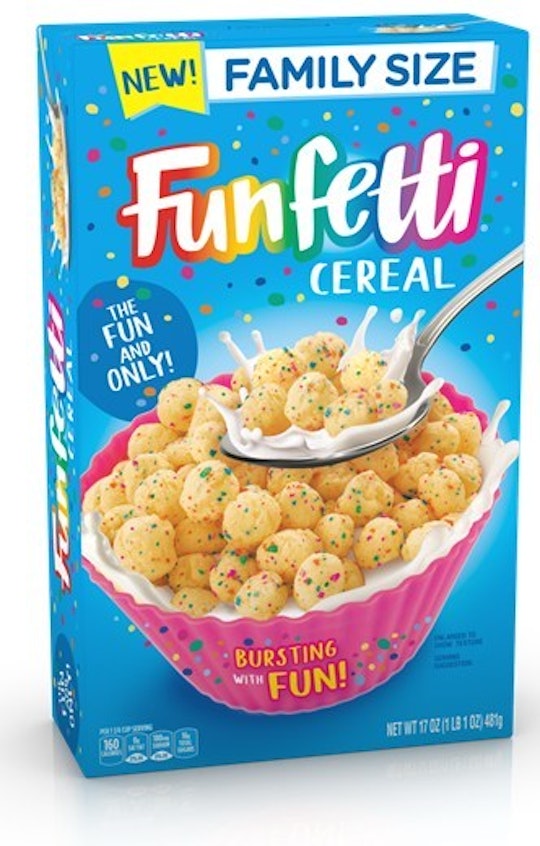 OMG, Funfetti Cereal Is Coming To Turn Breakfast Into A Party

Is there any happier cake than a Funfetti cake? No, there is not. It's the cake that makes everyone instantly giddy and filled with glee over its sprinkle specked fluffy interior. And now, Hometown Food Company, the makers of the confectionary delight, have announced that Funfetti cereal is coming, so get your fancy pajamas on, because breakfast is now a party.

The cereal is coming in August, and it will cost between $3.50 and $5.50 per box depending upon the size. Funfetti cereal is coming to stores nationwide, and should be available in all major retailers. The manufacturers noted that while it's not available just yet, you can "join Funfetti in celebrating delicious recipes, behind-the-scenes moments and more by following along via Facebook and Instagram." And perhaps drool over their sweet recipes that the company routinely posts. Because let's be honest, we could all use a sweet pick-me-up.

The cereal itself is almost too exciting for words. Piles of crispy vanilla pillows, dotted with bright flakes of confetti, practically dancing in the pool of milk. Somehow in the fog of the morning, this cereal reminds you that beneath the admittedly rough exterior of the mother of small humans, you are a fun-loving person who once danced barefoot in the mud at a Taylor Swift concert and baked Funfetti cupcakes while drinking cheap rosé champagne the next day because you wanted to ride that high.

In that "before" land, you dreamed of making your kids Funfetti birthday cakes or Funfetti waffles on lazy Sunday mornings — and you have. But now, you're a little more pressed for time. Basically, I think we are all ready for a little Funfetti cereal, don't you?