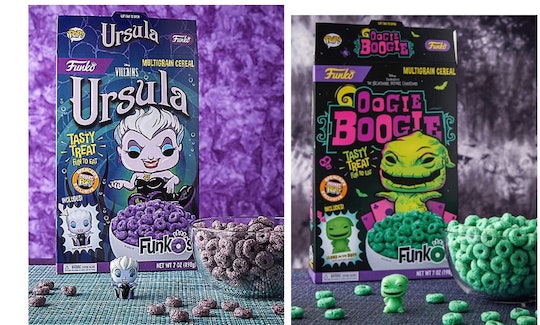 OMG These Ursula & Oogie Boogie Disney Villains Cereals Are Everything

What happens when you combine classic movie villains, iconic toy collectibles, and tasty breakfast cereal? It's only one of the sweetest and spookiest collaborations of the year. Funko's Disney Villain Halloween Cereals featuring Ursula and Oogie Boogie offer a serious taste of nostalgia for grown-up '90s kids everywhere. Seriously, when was the last time you had the joy of finding a cool toy in your brightly colored breakfast cereal? It's been way too long, so let Funko take you back with this spooky selection.

Expected to ship out in early September 2019, the two Funko's Disney Villain Halloween cereals are available for pre-order now at Spirit Halloween and Spencer's. First up is Oogie Boogie Funko's Cereal, based on the classic bad guy from Tim Burton's The Nightmare Before Christmas. The stop-motion creeper from 1993 is back with this vibrant green cereal, as well as a glow in the dark collectible Oogie Boogie Pocket Pop Figure. Although Funko figures are famously adorable, even the inch-tall version of Oogie Boogie is still pretty scary, with serpent eyes and a stitched-together body. The multigrain cereal, however, does look pretty fun to eat, and it'll scare up a good breakfast for nostalgic adults and curious kiddos alike. Sure, it's still technically summer right now, but it's beginning to look a lot like Halloween already.

Not to be outdone, one of the most divine Disney villains of all time also graces the cover of her own cereal box this Halloween. Arriving in a deep purple color, the Ursula Funko’s Cereal also includes a collectible Ursula Pocket POP figurine. Honestly, the tentacled villain from 1989's The Little Mermaid never looked so dang cute, and that eye shadow is perfection. To ramp up the nostalgia factor a bit more, there's even a cool undersea maze on the back of the cereal box. It just invites you to pick up a crayon and go to town. Really, even the most poor, unfortunate soul out there would get a kick out of this cereal and the fun little collectible. Honestly, I might stock up on these and hand them out as gifts when it's closer to Halloween.

Oh, and if the sea witch was always your favorite character in the movie, there's a case to be made that Ursula From 'The Little Mermaid' was actually the movie's hero, according to Bustle. I mean, she takes up space and seriously values her own worth. She's kind of an icon, really, and maybe a perfect source for costume inspiration this Halloween.

In addition, if these two selections have you yearning for more cereal, then just keep an eye out for the many other Funko's releases. Previous Funko's cereals have featured The Golden Girls, Buddy the Elf, Elvira, and Five Nights At Freddy's. (The Freddy Faz Bear cereal is arguably scarier than their Halloween releases, anyway.)

Whether you enjoy these cereals solo or share them with your children, they offer a fun journey into nostalgia that kids of all ages will enjoy. If nothing else, it's a great excuse to sing "This Is Halloween" and "Under The Sea" at random, which is always fun.