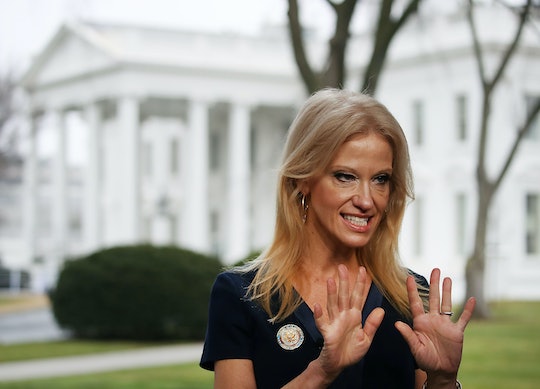 On Saturday, according to NBC, White House Press Secretary Sean Spicer held a media conference in order to erroneously claim that President Trump's inauguration entertained "the largest audience to ever witness an inauguration, period, both in person and around the globe." When Kellyanne Conway, counselor to the president, was pressed about Spicer's statements by NBC, she explained that Spicer had issued "alternative facts." Since Conway uttered those words, however, people have taken to Twitter with their own "alternative facts" to share, and the funniest "alternative facts" tweets out there prove just how ridiculous the argument truly was.

"I don't think you can prove those numbers one way or another," Conway said. "There's no way to quantify crowd numbers." During the interview, she also suggested that the White House press office could change its relationship with the media or NBC in the future, saying:

While many people have criticized Conway's defense of Spicer, others have resorted to crafting funny "alternative facts" tweets, instead. Here are a few of the best:

In fact, most of Spicer's "alternative facts" were incorrect. Aerial pictures taken of both Trump and President Obama's inaugurations show that Trump's inauguration had far fewer attendees. According to The New York Times, less people tuned in for Trump's inauguration on television than they did for Obama's or President Reagan's inaugurations. Spicer also said that security measures had changed this year, allowing less people into the National Mall for the inauguration. However, the Secret Service said security processes mostly hadn't changed, and according to The New York Times, there were few reports of delays and waiting times to enter the National Mall weren't long.

The fact that the White House's new press secretary opened his very first press conference with falsehoods might scare some Americans — but fighting that fear with fantastic memes is actually a great way to combat stress. Amusing stories are also shared more frequently, according to The New Yorker, meaning Conway's "alternative facts" story garnered more reads thanks to the memes it spurred than it otherwise would have. So, in the event of more "alternative facts" from officials, please do get on Twitter and make light of questionable arguments.