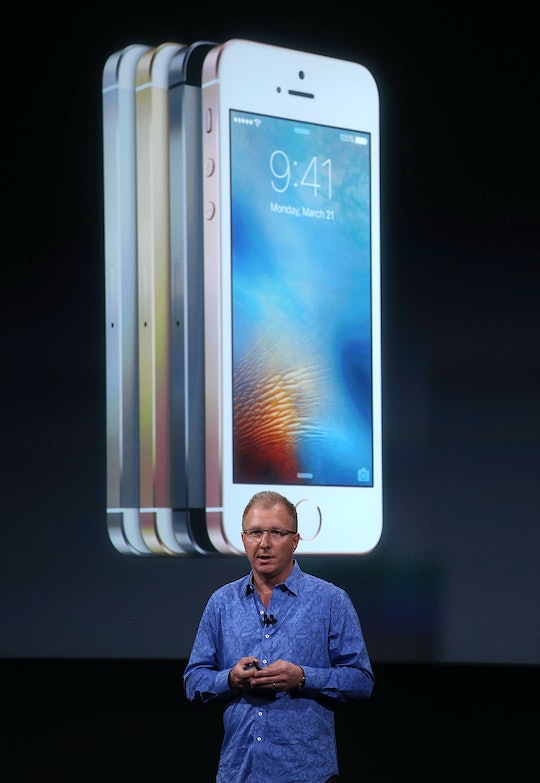 By now, most tech savvy people know that every time Apple holds an event to announce a new product, the whole world watches — specifically, all of Twitter watches. The social network was in top form on Monday when, at a highly anticipated gathering, Apple introduced the iPhone SE, leading to plenty of snark and dismay from the world of social media. Of course, it didn't help that Apple vice president Greg Joswiak introduced the phone as the "most powerful four inches ever", leading Twitter to crank out some of the funniest iPhone SE jokes ever. Clearly, Tech-Twitter knows how to have a good time.

From quips about Joswiak's "four inches" comment, to the tiny size of the phone and the memory capacity itself, it seemed anyone with an account on the social media site had their minds in the gutter or their commentary loaded and ready to go. "*Buys iPhone SE 16GB*," joked one user. "*Shoots 5 seconds of 4k video*... *OUT OF STORAGE.*"

That doesn't mean people aren't looking forward to the new device, of course. One user recapped all of the day's commentary by setting off some truth bombs. "Everyone complaining about the iPhone SE," they wrote, "we know you all gonna end buying the damn phone." And that Twitter user is probably right. If you have an iPhone, whether you want to or not, eventually you'll likely upgrade to the SE, or at least something like it. It supposedly has all the capabilities of the 6S, but it's just, well, mini. And hey, that's not the worst thing ever.

Speaking of size, apparently it does matter to some, as evidenced by how quickly the conversation turned to penis jokes. And Donald Trump's stubby fingers. This is why we can't have nice things, America:

Way to keep it classy, Twitter. Of course, not everyone focused their jokes on Joswiak's "four inches" comment:

Releasing a phone that's just four inches is a big move for the tech company, as smartphones just keep getting bigger and bigger. No wonder most of the men on Twitter were a little bummed about the dimensions. Is an oversized phone the new mid-life crisis sports car purchase? Because quite frankly, I myself have never been so excited to hear about something so little. With tiny hands, I have never been able to handle (ahem) the oversized iPhones comfortably, so the new SE might be just the thing for me, and many others.

I don't need a big screen. I'm 5 feet tall and my hands are proportional. The last time I could use a cellphone without awkwardly holding it or getting mini cramps in my thumbs was around the time of the Motorola Razr, and I'm not ashamed to admit it. (Even if you are comfortably scrolling through Instagram on your iPhone 6, how do you fit it in your jean pockets? I need to know.)

Much like other things men tend to measure, it looks like smartphones fall in line with the same, diplomatic message that women have been using for ages: Everyone is different and it totally depends on how you use it. So while Apple may have unintentionally launched a million hilarious Twitter jokes, it looks like the tech company is the one getting the last laugh.