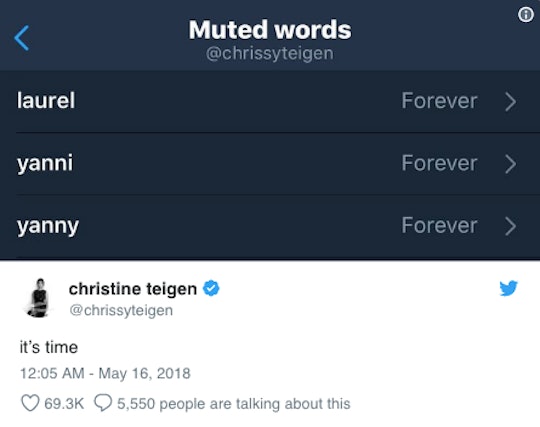 Ever since "the dress" rocked the internet back in 2015, netizens have made several attempts to find something equally as divisive and puzzling. And finally, the color-changing garment has met its match in laurel vs. yanny, the debate currently mystifying Twitter. When a user posted an audio clip asking followers if they heard the word "yanny" or "laurel," her tweet quickly went viral, with thousands of users claiming they heard different words. And as if the whole ordeal isn't notable enough in itself, some of the the funniest laurel and yanny tweets make it all even funnier.

"What do you hear?! Yanny or Laurel," tweeted Twitterer Cloe Feldman on Monday, alongside a 4-second audio clip. Yesterday, I was 100 percent certain the voice was saying yanny, but earlier today, it clearly sounded like laurel. And now, it sounds like yanny again. Have my ears forsaken me?!

Unsurprisingly, a bunch of people have already done deep dives into what the hell is going on here. Many suggested that the ears hear different words based on the pitch, frequency, and bass, which can be affected by which speakers you use, reported Vox.

Here's the original tweet, so you can hear it for yourself.

When adjusting the bass levels, some people were able to hear both words.

Someone suggested that the word you hear could depend on the sounds surrounding you, or the ones you just heard. For example, listening to music before the audio clip had an effect on some people.

Anyway, all audio science aside, many people were more focused on the ridiculousness of this drama, including celebs like Chrissy Teigen, Mindy Kaling, and Ellen DeGeneres.

While Mindy Kaling is clearly team yanny (and not yanni)...

...her bestie B.J. Novak did not seem to agree. She shared a screenshot of their texting conversation about it to her Instagram story.

And even though Kaling seemed pretty obsessed with the whole debate, Chrissy Teigen got over it fairly quickly...

...but not before expressing her support for Team Laurel.

Teigen's parents cannot say the same, however. Her mom heard "rural" and her dad didn't hear anything.

And your favorite talk show host Ellen DeGeneres, who is Team Laurel, seems to be taking the debate very seriously.

Just like DeGeneres, Katy Perry is putting all her egg's in the laurel basket.

Plus, Billy Eichner naturally had some on-point commentary.

Sean Spicer (remember him?) attempted to use this as an opportunity for one last dose of viral fame, doing some 2016 election wordplay Unfortunately for him, his tweet garnered less than 500 likes. You get what you deserve, Spice!

Plenty of others shared their hilarious takes on the laurel vs. yanny dispute, as well:

Some people even made comparisons to the dress.

No matter which name you hear, and no matter what causes you to hear it, it's kind of nice to have something bringing the world together, divisive as the yanny vs. laurel debate may be. However, there actually is an answer to the question "yanny or laurel?" reported Wired. Firstly, even though Feldman's tweet may have rocketed this debate into the mainstream, it first made waves on Reddit, reported Wired. Plus, most importantly, the audio clip was actually taken from vocabulary.com's page for "laurel," which is "a wreath worn on the head, usually as a symbol of victory," a la Julius Caesar.

There you have it folks, the recording is in fact saying laurel. It wouldn't be inappropriate for all members of Team Laurel to wear laurels on their heads for the rest of the week.