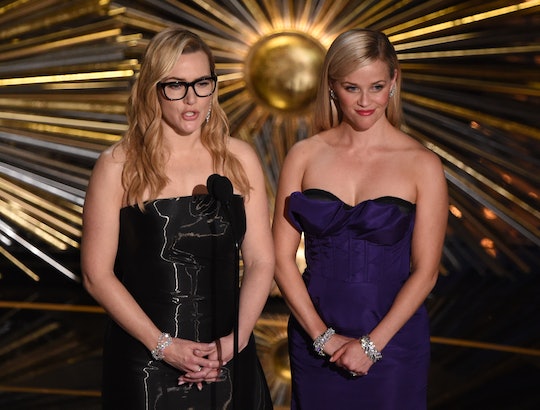 The Oscars are all about the fashion statements, and Kate Winslet made a rather large one at the 88th Annual Academy Awards. Though the Best Supporting Actress nominee walked the red carpet with a frame-free face, she surprised everyone when she stepped on stage and rocked some seriously large spectacles. And, because we live in a world where people offer their opinion on everything, there were some pretty funny reactions to Kate Winslet's glasses at the Oscars.

Winslet showed off her special accessory when introducing Spotlight, one of the year's Best Picture nominees. As with any award show look, some people loved the actress’s glasses and some people wished she had put in her contacts. And a ton of people called her out for not thinking to straighten the spectacles. Many thought the frames were simply a way for actress to channel her inner hipster, but believe it or not Winslet wears glasses in her day-to-day life. Yes, guys, celebrities really are just like us, and they sometimes need to wear prescription lenses to read the super small print on those teleprompters.

I, for one, give credit to Winslet for rocking her frames on the Oscars stage. As a fellow four-eyes (though I often opt for my contacts), it’s nice to see a celebrity who isn’t afraid to show that there is something about her that isn’t perfect. But hey, that’s just me.

Some people hated them.

Some people thought they were fake.

And some people just wanted her to straighten them.

But, let's be honest: If anyone can pull of crooked, fake glasses at an award show, it's Miss Winslet.