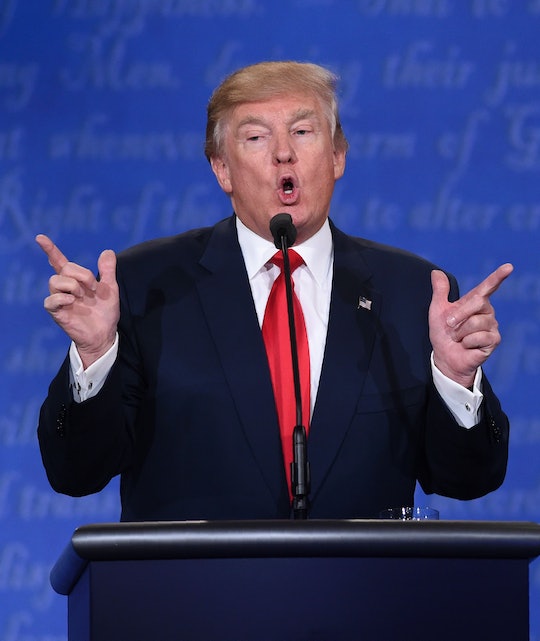 Republican Party presidential candidate Donald Trump believes he is right about a lot of things — in fact, he often can't even admit his own failures. He can, however, admit that Democratic Party candidate Hillary Clinton is wrong (a lot). During the third presidential debate, Trump claimed Clinton was wrong about a lot of things and said so on a regular, relentless basis. But the funniest Trump "wrong" tweets and memes prove that Trump's use of the word is a little ridiculous, if not absolutely hilarious.

During the debates, Trump seemed to love the word "wrong." He used it when talking about Clinton's policies and decisions she has made during her extensive political career, but also when she made claims against Trump. Those claims — like the undeniable fact that Trump was for the Iraq war, which has been proven to be true — were refuted by Trump as "wrong" during the debate, even though tapes say otherwise. But, during Wednesday night's debate, Trump using "wrong" as a way to dispute Clinton and prove himself right turned out to be, well, kind of wrong.

The best memes and tweets from the debate show just how annoying Trump's use of that word was throughout the debate (and how a presidential candidate should probably use more than one syllable to contradict his opponent). Still, the internet couldn't keep itself from finding the funny in Trump's inability to expand his vocabulary.

While Twitter users were able to find the humor in Trump's unapologetic denial of, well, anything, Trump's denial of Clinton's statements and his own past words is kind of ridiculous. Fact checkers during the debate continually found that Trump was wrong about some of the claims he made on the debate stage Wednesday. Additionally, PolitiFact notes that Trump has and continues to make untrue statements on the campaign trail. Trump has been wrong about a lot of things recently — from falsely claiming that this election is already rigged to telling voters in Florida to vote on the wrong date.