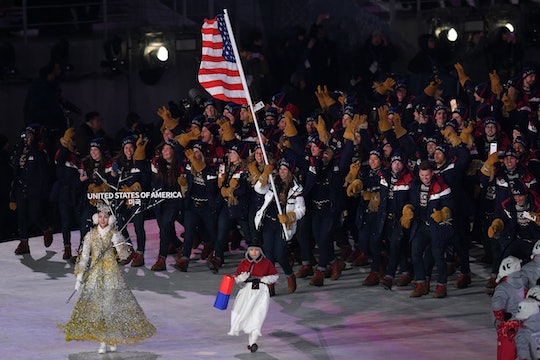 I'm going to be honest with you folks. I absolutely love the Olympics opening ceremony every year. It is always one part terribly earnest and two parts camp and there is nothing that can replace that kind of joy in my heart. Also it often makes me laugh. And clearly I'm not alone. The funniest tweets about the opening ceremony in PyeongChang prove that sometimes even world peace can make people giggle. I'm sorry, sometimes this stuff is funny. I still love you, South Korea.

Many tweets celebrated the beauty of the ceremony, which was, I am happy to say, absolutely gorgeous. The light shows, the dancing, the music, the children. It was all completely over-the-top amazing and one of my favorite opening ceremonies in recent memory. So naturally, lots of people were moved by the beauty of the whole thing and the message of peace in these strange, politically fraught times we're living in today. But of course, where would we be as a globe without a little bit of humor. So the amateur comedians obviously had lots to say about the ceremony too. I mean, sometimes you just can't resist a little joke. And I think it's better that way, don't you?

American audiences probably missed this, but apparently the BBC commentary was on fire during the opening ceremony and came out with this zinger: "Let's see how much fun you can have with a doorway? This is probably the most exciting thing since Monsters Inc." I love it.

A lot of people had *emotions* about seeing North and South Korea march together under a single unified flag at the Olympics opening ceremony. The two divided countries have had a long and difficult relationship over the years, and especially with things being so politically uncertain with North Korea recently, it's nothing short of beautiful to see the two countries come together like this.

Others were just wowed by the whole spectacle of the thing, in the most hilarious ways.

Other people were extremely jazzed to hear and see some of their favorite things represented during the opening ceremony. Namely, people were extremely excited to hear BTS's certified bop "DNA" playing during the march, even though the band themselves did not actually perform. If you can't get the real thing, at least you can get some representation from the K-Pop world. I am for it.

Some people loved the Olympic opening ceremony for what it is, English-speaking announcers trying their best and failing at pronouncing names in other languages. It's about the effort, y'all. I don't know if I can pronounce PyeongChang correctly, to be honest.

Some people were just living their best lives out there in freezing South Korea.

Others were political, and obviously having some feelings about North Korea.

Lots of people had things to say about two particular countries who have decided that they are impervious to cold. Yes, the iconic flag-bearer from Tonga was back, shirtless in freezing whether. And yes, the athletes from Bermuda apparently believe long pants are beneath them. I am for it. What even is cold?

In fact, people seemed to have a lot to say about Olympian uniforms altogether. The Americans may have been a lot warmer than Tonga and Bermuda, but they made a pretty bold fashion statement of their own.

You know what, whatever haters. At least the Americans had toasty warm fingers and I think the gloves are very fashion. Or something.

I think we've all learned a valuable lesson about world peace from the opening ceremony. And also that people will always mock you for what you're wearing no matter what it is. It's a cruel world. But funny.