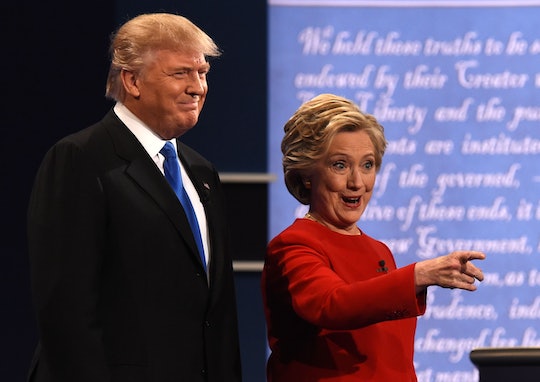 The first presidential debate on Monday night between Republican nominee Donald Trump and Democratic nominee Hillary Clinton started off on a discussion about the economy. But many viewers were thinking about the camera work. Because the debate was formatted by the Commission of Presidential Debates to focus on just the candidates and not the audience response or the moderators, every network decided to use a split screen. The funniest tweets about the split screen at the presidential debate might be able to take your mind off of all the political rhetoric for the time being.

As soon as the debate took off, the candidates went at each other, making the split screen all the more important. Being able to watch the two opponents react to each other made the entire discussion more intense. It was obvious that they were both doing their best to entirely restrain themselves and their random facial expressions listening to the other speak.

It began to get heated early on as the two candidates broke down their economic policies and bickered about whose website said what. The shade was very real on both ends. It allowed voters to see Clinton's laughs while Trump attacked her about her emails, and to see Trump grimace while his opponent spoke about his business acumen.

But forget policy. It was all about the split screen.

A lot of comments from the Clinton campaign before the debate were focused on how heavily the former secretary of state was preparing to face Trump and how little Trump was preparing his own remarks. Next round, they should both study how the split screen looks to viewers at home.

The split screen worked for and against both of the candidates. For those that dislike Clinton's demeanor, she kept a tightlipped smile most of the time the real-estate mogul spoke, with only an odd eye roll here and there. Trump had more trouble controlling his gut reaction and "poker face."

If anything, the split screen did exactly what it was meant to do: show the candidates up close and personal and give viewers at home a better look at what might be going on in their heads while they spoke and prepared to rebut their opponent. Throughout the evening, each candidate seemed to check themselves (since they didn't have any ear pieces to be taking coaching from their advisors) and get better at restraining themselves.

Even if it got a little creepy now and again, the broadcasting technique, definitely worked on some level. Just maybe not for the two candidates fighting to be the president.