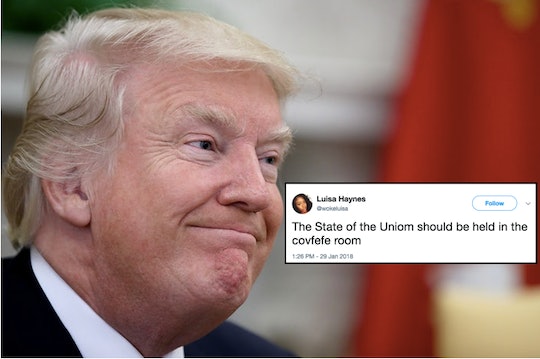 There are few things that the voices of Twitter love more than a good typo. Most recently, there was a typo on some of the tickets distributed for President Donald Trump's first State of the Union address to Congress taking place on Tuesday. The tickets welcomed visitors to the "State of the Uniom" and an onslaught of hilarious tweets ensued quickly afterwards. The phrase is even trending on Twitter. Did the world just find its new covfefe?

The tickets in question were issued by the Office of the Sergeant at Arms and Doorkeeper and are given to the spouses and guests of members of Congress, granting them access to seats in the gallery for the address, according to CNN. The misprinted tickets have since been reprinted and redistributed, but not before some photos were taken of the gaffe and used to make a ton of jokes on Twitter.

Quips came from Democratic lawmakers and members of the public alike and many pointed out that this wasn't the first typo during the Trump presidency. Some of the jokes addressed the current state of our educational system.

Some Blamed The State Of Education In The U.S.

The education jokes are a bit painful, but I can't say they're wrong. Some blamed Education Secretary Betsy DeVos for the failure, while others jumped at the opportunity to criticize Common Core. Ouch. Fortunately, the hilarity didn't stop there.

No One Forgot About "Covfefe"

A favorite from this presidency, the original Trump typo "covfefe" made its way back to my timeline. In case you've somehow managed to forget, Trump first confused the world by writing "covfefe" in a late-night tweet about the media back in May. The covfefe references died down for a while, but the "State of the Uniom" blunder has made it relevant yet again.

Wait... Was Russia Behind It All?

Another popular theme of these jokes was Trump's rumored relationship with Russia and Vladimir Putin. The ongoing investigation into Russian interference in the presidential election, as well as any potential collusion between the two parties, is a sore subject for his supporters, but a favorite bruise to poke for his critics.

The Princess Bride Made A Cameo

Somehow, the lovably speech impeded officiant of Buttercup and Prince Humperdinck's wedding made his way into the jokes as well. Admittedly, I would much rather listen through his State of the Union speech than Trump's.

Some Think This Typo Kind Of Sums Of This Presidency

Of course, a lot of the jokes and flat-out criticisms were just jabs at Trump himself and his presidency thus far. While the misprint wasn't actually Trump's personal mistake — they are printed by the Office of the Sergeant at Arms and Doorkeeper, according to CNN — that didn't stop critics from poking fun at Trump and his officials.

Aside from cracking a few jokes, some users on Twitter used the trending hashtag as an opportunity to share the growing movement to boycott the address, as ABC News reported. Numerous Democrats, including Reps. Maxine Waters from California, Frederica Wilson from Florida, and Pramila Jayapal from Washington, are reportedly boycotting the State of the Union following offensive remarks made by the president, according to ABC News. It appears that members of the public are also planning to turn their TVs elsewhere.