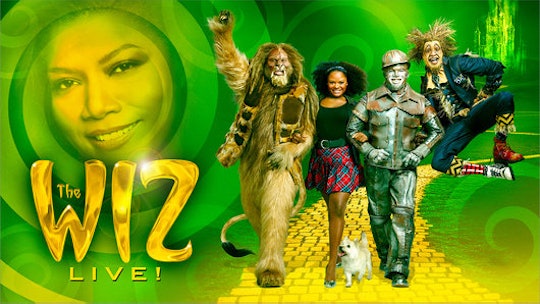 As anyone who watched NBC's live productions of Sound of Music and Peter Pan can attest, Twitter is often the best part of any live show. But it seemed as though we might not get as many LOL-worthy reactions during The Wiz Live!. Why? Well, because the production was actually pretty great. Still, Twitter rose to the occasion, even with little to mock beyond outlandish (but fabulous) costumes. Yes, Twitter's funniest tweets about The Wiz Live! are just as hilarious as you would have hoped they would be.

And there was certainly no shortage of tweets. After all, even before The Wiz Live! began, #TheWiz became the no. 1 Twitter trend of the night. Which meant, of course, that everyone choosing to discuss the show on the social media platform had to bring. It.

And nothing gave them a better opportunity to do so than one scene in particular. If you saw the live production, you know what scene I speak of — the totally, totally bananas Emerald City scene. You know, the one filled with futuristic costumes, voguing, and Common dressed as a bright green everlasting gobstopper?

I mean, who doesn't want in?

Come on, the voguing, people!

Honestly, this just sums up that scene best.

Because that scene. Had. Everything, right?!