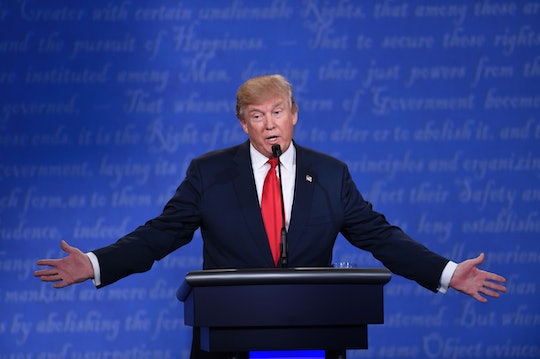 During the final presidential debate, Republican presidential nominee Donald Trump added some theatrical language to his argument about immigration, but it may not have had the effect he intended. As the funniest tweets about Trump's "bad hombres" quote show, many people once again realized just how dangerous and absolutely ridiculous Trump's language can be.

The quote harkened back to when Trump announced his candidacy with a rant about locking down the southern border by building a wall. On that day way back in June 2015, Trump stood in his own Trump Tower and criticized Mexican immigrants:

Fast forward 16 months to the final debate and it was like Trump was reading from the same script:

By reviving talk about these "bad hombres," it shows Trump really hasn't progressed that far in the months since in terms of his views on Mexican immigrants. And, while it was disappointing to hear him still talking in disparaging terms, some people on Twitter were able to see the humor in Trump's words:

Some noted we need to start a new dictionary for translating Trump terms:

Even the Clinton campaign jumped on the out-of-place term:

Aside from the "hombre" comment, Trump took the opportunity during the debate to talk about his immigration plan, which included another promise to build a wall between the United States and Mexico. He also criticized Clinton's plans by saying she supports "open borders" and "amnesty" for people who already came to the country illegally. He added, "Hillary Clinton wanted the wall. Hillary Clinton fought for the wall in 2006 or thereabouts. Now, she never gets anything done, so naturally it wasn't built."

Trump's statements about Clinton's immigration policies did not entirely represent the truth, as debate-watching fact-checkers pointed out: Clinton supported the 2006 Secure Fence Act and the barrier was constructed, just not to Trump's 10-foot-wall standards and with gaps for landowners.