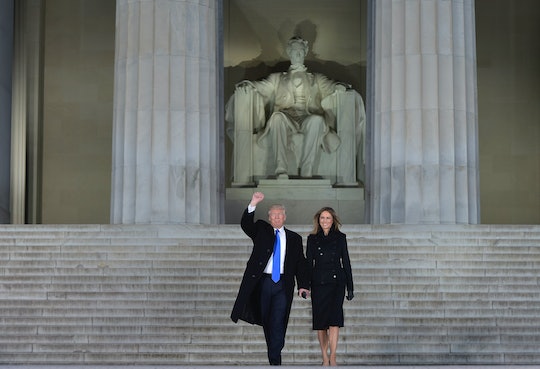 Funny Trump Inauguration Tweets To Get You Through

While there's nothing inherently funny about the fear and worry that has plagued much of America since the election, now culminating with the swearing-in of Donald J. Trump as the actual president of the United States, many people are just trying to get through the day however they can. In the spirit of the new president, many have taken to Twitter to try to process what's happening. The funniest tweets about Trump's inauguration are a mixed back of existential woe, memes, and clever observations.

Throughout the campaigning, the grueling election cycle of 2016, and certainly in the interim between the election and the inauguration, social media has provided a forum for discussion and an outlet for stress. Even the president-elect himself has utilized Twitter as his primary platform for communicating everything from his distrust of the media to his lack of enjoyment of Saturday Night Live. In other words, the incoming president uses Twitter for a lot of the same things we do. While that's kind of strange and kind of disarming, in any case, Twitter has been a source of fleeting joy, meme-worthy moments gif'd and screenshot'd for posterity, and for better or worse, social media does let us experience historic moments in real-time.

And, of course, provide our commentary.

Of course the only person having a worse time at the inauguration than the Obamas would be Hillary Clinton. Before the ceremony, Clinton tweeted that she was attending, which must have been gut-wrenching. Clinton, you recall, lost the electoral vote to Trump and therefore the presidency, but won the popular vote by a historic margin. She also was the recipient of plenty of vitriol, and found herself at the center of an unprecedented FBI investigation that may or may not have been orchestrated by Russia and the Trump campaign in order to derail her campaign.

In other words, if Hillary Clinton could show up to the inauguration of the man she lost the presidency to in the midst of media reports that he may have utilized the government of an enemy country to completely undermine her campaign and assure her loss, the rest of us should be able to get through this day, this weekend, and the next four years.