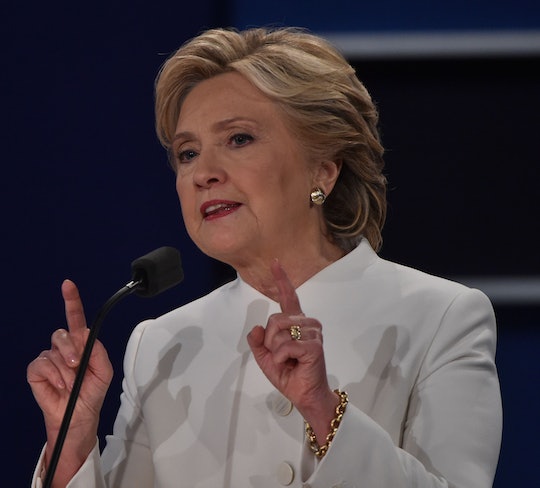 It's the final presidential debate of the 2016 campaign, and Hillary Clinton is not messing around, as evidenced by her refusal to let her opponent get away with some serious hypocrisy. As the two discussed the economy and jobs Wednesday night, the Democratic nominee pointed out that Donald Trump has engaged in the purchasing of building equipment from overseas, a practice he so often decries. He's actually purchased Chinese steel and aluminum in the past to complete at least one major real estate project, she said, and the funniest memes and tweets about Hillary's "Chinese steel" insult show how much the her quick comeback really was appreciated.

The relatively obscure issue of Chinese steel is wrapped up in trade, according to The Washington Post. Over the summer, the U.S. International Trade Commission ruled that subsidies from the Chinese and Japanese were harming the American steel industry. Soon after, the European Union responded by placing high tariffs on Chinese and Russian steel.

The issue doesn't actually affect that many Americans, the outlet reported. Still, those who work in industries that are directly affected or threatened by competition from other countries tend to strongly oppose international trade.

Which is why Clinton reminding the electorate that Trump has used Chinese steel on a large scale was such a zinger:

Here's what she said in full, according to NPR:

Donald has bought Chinese steel and aluminum. In fact, the Trump hotel right here in Las Vegas was made with Chinese steel. So he goes around with crocodile tears about how terrible it is, but he has given jobs to Chinese steelworkers, American Steelworkers.

NPR international correspondents uncovered evidence that this claim was true, and that the hotel in question was built in 2008. Of course, Clinton already knew that.

Obscure and heavily policy-oriented, it was Clinton's version of a mic drop:

And she's probably reliving the moment as she pops some post-debate champagne bottles:

At the very least, she can know that she made some reporters laugh:

No matter what, Clinton's probably feeling pretty good as she spends the next 19 days figuring out all the ways she cam seek to destroy Trump on Election Day:

The debates are now officially behind us. Clinton planted a pretty strong seed when she insinuated that Trump has favored Chinese steelworkers over American ones, and now it's time to see how that, and all the other debate-time accusations, revelations, and disagreements, affect the outcome on Nov. 8.